CRACKED #190: Is this gag prescient or what? 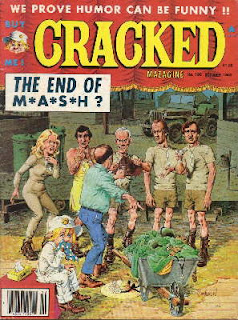 Did we know, at this point, that the show was about to enter its final (11th) season? Hmmm...If not, CRACKED predicts our future! The cover is one of my favorites. The curtain coming down and the fact that the background Severin has drawn is a background. The backdrop of the MASH sets. It's great stuff.

POSTER: Yellow background? Check. A classic bit of gaggery. Check. Pretty good one. $5 to everyone whose name begins with "A" through "Y". But...there are no forms left!

TABLE OF CONTENTS: Oh...I take back everything I said. "Looks like the curtain's coming down on MASH." I guess they did know. I think. Pru F-d-r? Luke N. Cee. He's back!

LETTUCE FROM OUR READERS: Next Issue - August 10th. I had just turned nine when this issue came out. I am now the perfect age group for CRACKED!

THE DAY M*A*S*H*E*D ALMOST ENDED: What happened to M*U*S*H? Peace is declared! And, everyone tries to think of where they might go next..."D.J. and The Eye" - A medical examiner show. Marguerite Hooligan as Frontier Nurse! Eagleye and pals try to keep the fact that the war is over from everyone but...in the end...they fail. "Benji Loves Eagleye" is being set-up. But, even more "in the end", the network keeps the war going indefinitely! Hooray!...at least for a little while.

Can you believe MASH is ending?

IF AUTHORS REALLY MEANT WHAT THEY SAID!: Well...this is like those "Misread Headlines" bit. They are repeating their concepts a lot lately. "Walking down the street, he was struck by a thought." A man is being taken away by an ambulance. "Coulda been worse? He coulda been run over by a concept!" Funny but oh so familiar.

ABSOLUTELY, UNQUESTIONABLY, POSITIVELY, UNDENIABLY, THE VERY, VERY, LAST OF THE CRACKED LENS (AND WE REALLY, REALLY MEAN IT THIS TIME, FOR SURE!) PART XV: The saboteurs are shown parachuting into one of the frames. Two pages, several laughs. They never let you down with these.

THE CRACKED GUIDE TO WINDSURFING: Wow! We haven't had one of these in ages. It's four pages of Windsurfing excitement narrated by a man named "Biff" whose head floats over each panel. It's wackiness it's Biff saying you must care for your board and we see a man giving flowers to his board. There's a gal with big boobs. Big waves. Falling down and all kinds of gaggage. It's an all right bit...I don't think these are filler because they're too elaborate. What are they then?

NEW USES FOR TELEVISION: Laser disks and video recorders! Magazine appear on your TV. Works of art. Change the view from your apartment. Place TV screens everywhere and go on a vacation in your home. Big screens and small screens. And, it's a pretty good bit and suddenly it's over...two pages was too short here.

A CRACKED LOOK AT A POLICE SQUAD: This issue hit the stands on July 6th 1982. Police Squad! (the Zuckers very funny but short-lived show) was canceled on July 8th. Boy, I wonder if they knew that that would happen. But, let's be honest...these bits can have a cool very crowded feel to them but the jokes are usually pretty rotten. No difference here...One example: "See the poor posture on that officer over there?" "He's obviously a crooked cop." Police Squad! was a fun show. I wish there were more than 6 episodes but 6 episodes (and the three movies) were perfect.

Oh...just read a little more. Apparently, four episodes were aired in March. The Network yanked it and the last two aired on July 2nd and July 8th. CRACKED! You're good.

THE CRACKED STEP-BY-STEP FOR GROWING YOUR OWN GARDEN: Feels too much like the Windsurfing bit to me. Six in-depth comedy-packed steps help you grow a "bumper crop". (Do you get that one?)
Step 1 - When to start the garden
Step 2 - How big a garden to have and where to place it
Step 3 - Preparing the soil
Step 4 - What to plant
Step 5 - Once your seeds are in
Step 6 - Harvesting and Enjoying
The bit has a few smiling moments but it's nothing that great.

GREAT MOMENTS IN HISTORY: More stills with captions and some word balloons. Although, I don't know some of these don't quite make sense...I don't want to post them because they'll make less sense in my description but a few of these gag...I don't quite get. Is my mind turning to a jelly? And, if so, what flavor?

CRACKED'S CARTOON SHOWCASE FEATURING JEFF KEATE: Two pages of pretty funny one-panel gags. I like when CRACKED goes into areas like this. Things they don't normally do. Fun.

CRACK UPS! FEATURING SAGEBRUSH: It's an OK Sagebrush. Better than the last one.

HOW HOT IS IT?: Not hot enough that three pages of these gags are needed. "Fish in New Mexico have taken to begging." is pretty funny...actually, re-reading this...this is the funniest of all of these bits. There's actually some creativity here. Well done. Hamlet! "Erik Estrada as Hamlet Gary Coleman as the King!" Th theater is air conditioned, after all. Pretty good bit...I take back my opening sentences.

CRACKED INTERVIEWS THE SPECIAL EFFECTS KING: Douglas Thimbal talks about the effects for "Escape From The Clone Zone", which involves giant attack noses. The Special Effects King looks a lot like that evil doctor from Captain Marvel/ Shazam! What the heck was his name. Dr. Silvana? or something...Why am I having trouble finding this info? I'm using The Internet. It's a funny bit. Five pages of goofball explanations for special effects. It's worth a read.

It's a very solid issue of CRACKED. Some highs, some lows. But, looking at it from my 9-year-old perspective, I would have read this and then re-read it all day long. Good one, CRACKED!

Next issue: Buff and awesome!
Posted by Turbot's Finest at 11:24 AM