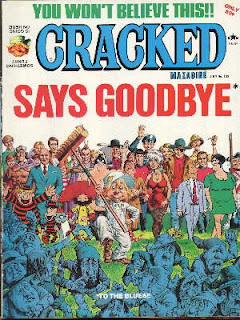 Cracked tried to scare me on this one. Look at that cover! All I can say is "thank the Lord for the asterisk." For several seconds, I thought this column was at an end. Wasn't there more? There had to be.

There is. Cracked, I will follow your advice. As of now, I will say Goodbye! To the Blues! Let's go inside.

(Just a quick note: someone very important is in the background of the cover. Over on the left. He will make a starring appearance very soon.)

POSTER: "In Case of Emergency -- PANIC!" I assume that has nothing to do with the aforementioned Blues who were banished earlier.

TABLE OF CONTENTS: I read that it is their intention to bring us "...the best in fun and keepin' those 'blues' on the run!" Thank you. Proof reader this month? Sy Clops.

LETTUCE: Letters from Michael Schaab and David Schaab! I wonder if they became friends after this.

SPACE:1998: A lot of colons there. I've never seen this show. Why, when I could watch the magic of The Time Tunnel? Some great artwork on this one and a nice layout. The jokes are cornier than a bag of unpopped Pop Secret. It moves, though, and again they avoid that cluttered slogging feeling that I get from a lot of the MAD parodies. A good opener.

CRACKED FRISBEE RATINGS SYSTEM: Finally! I knew someone was keeping track of how good I was. You are either a "Qualified Beginner", "Qualified Expert" or "Qualified Cracked Expert". Do I need to tell you which category I fall into with my 32 years of experience? Well, if I do just send an email to the blogmaster and we'll get back to you. No jokes here, just Frisbee reality. And, a joke about a stripper named "Sally Grind". Cracked? Et tu, Bawdy?

WHY IS IT ON TV YOU NEVER SEE: Five scenarios for stuff you never see. The best one? "Unenthusiastic People on T.V. Game Shows". "Let's Make A Deal" and Monty Hall encounter surly people who won't take prizes because the tax is too high. One lady holds up a sign that says "Fatty wants a Fat Deal!" Awesome. The strangest thing about this OK article is that the pages of my issue around here smell like pee. Pee from 1976. 30 year-old pee.

NEW ITEMS FOR THE AMERICAN BUYCENTENNIAL: Remember the bicentennial? Or the buycentennial? This has the same set-up as the previous article. But, it's less fun to look at. Lots of writing. The more writing I see in these magazine, the less I read. Visual and snappy is the CRACKED way. I'd take the Bicentennial X-Rays, though. "Each is an actual representation of what historians believed our forefathers' insides look like." And, there's a joke about Commemorative Air. I guess the article is pretty good. My opinions are all over today.

WINNERS & LOSERS: (and the converse) Fun drawings, old jokes. Winners on the left, losers on the right. A fun visual break after the last article. Although, I liked the last article so what am I talking about?

A CRACKED LOOK AT A TOURIST WELCOME CENTER: Cluttered. I took a few seconds and then looked for the "Th'End" in the corner. It's in the lower right hand corner. Look for it.

WELCOME BACK, KUTTER: A parody of a sitcom. Well, it's as funny as the sitcom. But, if you don't think the sitcom is funny, this won't help. I guess I'm just waiting on that One Day At A Time parody. I'll keep my fingers crossed.

ONE EVENING IN OLD MEXICO: One page gag. Good for a chuckle. Zorro is in it. For you Zorro completists.

DREAM ACRES: Lots of writing but pretty funny. A brochure for "America's Newest Planned Community: David D. Dreamy, Our Founder, Builder and Chief Profiteer" It's a beautiful, exclusive community that doesn't allow in anybody. That's the punchline and it's decent.

So far the issue is going along pretty good.

MORE COMBINED MOVIES: "My Fair Lady" & "King Kong" If you think about it a moment, you know exactly what this one-pager does. But, that doesn't mean I don't laugh my French butt off on the way there.

IF DIFFERENT NATIONAL PRODUCTS BECAME THE WORLD MONEY STANDARD: What if oil became the backing for all currency? These are jokes? Vodka becomes a standard. Sand, tourists, pizza, tea, snow and elephants join in. Funny gags. They mention a Black Market developing. It's called...Afro's Inc. "What's 'Afro's Inc.', dear?" "It must be the new Black Market that's developing." Who can argue?

A BINDER and NOTEBOOK ad: Order two and keep them in business.

CRACKED INTERVIEWS THE USED CAR KING: Sweet, sweet Nanny. She crawls in there and wriggles around and makes mincemeat that sleazy fellow selling used cars. Can I please get Nanny's phone number? How hard would that be?

A bird-themed Shut-Ups party. Not the strongest but the rest of the issue carries it.

A great issue. Not perfect but we are so poised on the edge of it. I am putting on my bathing cup. I am prepared to plunge into the CRACKED RENAISSANCE. We are waiting specifically on a very cool guy to help us out.