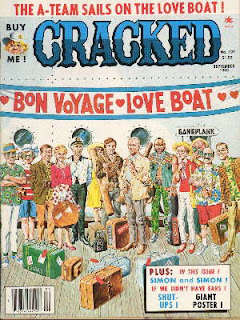 Well, The Love Boat's been on for ages, sure. The A-Team, however, are a whole new world. A whole new violent, repetitious, ultimately monotonous world. But, off center to the right...there he is...Mr. T! He is here. And, on the edges of the cover are my favorite things...the random tourists that strolled into the cover painting. I like that.

"Plus In This Issue! Simon and Simon! If We didn't Have Ears!" Woah. You had me at the "ears" thing.

POSTER: At the bottom, it reads "This poster is brought to you by the CRACKED Society to Prevent Historical Confusion. (A Non-Profit Institution - but we didn't plan it this way.)" Great gag. Pee yellow background.

Does anyone know how to decode this?

THE A-A-AAYY TEAM TAKES A RIDE ON THE LOVELY BOAT: Why is the title here different from the one in the Table Of Contents? High hilarity with saboteurs and kidnappers on the boat. The A-Team causes a heck of a lot of trouble. Destroying everything and blowing stuff up...All sorts of craziness. It is vaguely funny. The whole thing has a great pace to it that made me forget that it wasn't really all that hilarious. Oh well.. Final panel is killer. The Captain stands on the titled ship yelling "After what you guys did...[The A-Team's explosions and chaos on board.] THE SHIP IS SINKING!" Love that!

WHAT YOUR MOTHER WOULD SAY...WHAT YOUR FATHER WOULD SAY...: Oh, Dad! Oh, Mom! You say different things, don't you? "It's Saturday! Why can't I go to the beach? Huh? Jerry Slugfinster is going." MOM: "Oh! And if Jerry Slugfinster jumped off a cliff would you want to do that too?!?" DAD: "Have you washed the car and piled the newspapers in the garage? You should be doing more work around the house if you want go out on week-ends." Hi-Larious! "Can I borrow the keys to the car?" MOM & DAD: "No!" HA!!!!!! Well, kid, maybe you should get that driver's license first?

IF WE DIDNT HAVE EARS: Your walkman headphones would have to go up your nose. It would be tough whispering "sweet nothings" in your girl's ear. Instead of saying "I'm all ears", you'd say "I'm all nose!" I love the closing panel. (This is a high hilarity final closing panel issue.) "So, the next time you look in the mirror, rejoice over what you have..." A funny looking man is staring in the mirror, touching his ears. "Oh, EARS! I love you. Thank you for being a part of me!" A woman in curlers and a bathrobe walks by. "Are you going weird om me again, Frank?" Good stuff. And, the fact that Frank has gone weird before makes me smile.

MORE BELIEVE IT OR NOTS: No CRACKED Lens in this issue, guys? 4 pages of some fairly funny bits. Phyllis Diller is in this one. That's something to look forward to. I prefer The CRACKED LENS, though. There's something more, sort of, spontaneous feeling about it, if that makes sense.

CRACKED'S GUIDE FOR MAKING MONEY IN THE 80'S: All the great, greasy things you could do in 1983 to make cash, including endorsements, selling ET merchandise, becoming the leader of a third world company that fights communists and watching the US aid money come in...Stuff like that. Oddly political for CRACKED and not in a bad way. I enjoyed this.

REAL KIDS DON'T EAT SPINACH: A parody of the classic "Real Men Don't Eat Quiche". Those kids! They're so kid-like. Basically, we've got 4 pages of CRACKED that replicate 16 pages of this book about the quirks of kids. Troubles with baths. They know TV schedules and their birthdays but forget everything else...They try to stay up late. It's all just that sort of thing. Hmmm...this issue isn't doing a whole heck of a lot for me...Sorry.

CREATING YOUR OWN SUMMER JOBS: Sort of like the Guide to Making Money but simpler. The drawings are awesome. Filled with all sorts of odd looking people and kickass backgrounds. The actual gags are OK. Headings that say what the new job is with the picture below. "Vendor of Frozen Seat Cushions For People Who've Parked Their Cars In The Broiling Sun" A guy is shown with a fridge in a parking lot. He's taking a seat cushion out of the freezer and yelling to a lady "Why risk a burned bottom?" 5 bucks. It's 2 pages and it's fun.

HOW TO MAKE BASEBALL MORE INTERESTING: Feels like a repeat but I don't think it is. Stuff like more fighting and violence. At first base, they place quicksand so the next batter has to move quick so the runner isn't sucked under. Some guys ride horses. Multiple pitchers and batters. Lions are let loose on the field...Actually, this seems like it might be fun.

SIMIAN & SIMIAN: Sure, it's a great title but this is one of those shows, like Remington Steele, that I could never ever imagine watching when I was a kid. And, in fact, I never have. (Riptide was another one.) As I read this, I began to forget what I'd read..."Will you take our case?" "Well, there are many important factors to be considered." "Like What?" "Will you pay us?" "Of course." "Then, we'll take your case." I kept reading..."Now what?" "I think it's time to try one of our favorite tricks." "Sawing an eggroll in half?" And, I hit the fifth page..."Here's a bar of soap and a scrub brush." "What's this for?" "I want you to come clean." And, then it hurt. And then, CRACKED ran through the motions.

We are getting close to #212. The end of The Sproul Era. I know that these were the ones I read voraciously when I was a child. But, who knew how rotten my tastes were back then? I'm having a heck of a time getting jazzed up about this issue. The repeats mixed with the old jokes mixed with the dull parody subjects...Sigh...Come on, CRACKED! 200 is approaching. It's been 25 years since you started. Take off into the Comedy Stars again...For Pierre...

BACK COVER: Sagebrush. Fun back cover gag with a very cool use of the comic strip page.

Well, you saw my thoughts. I'm running out of steam. 15 issues before the end, I'm beginning to lose it. I'm entering the issues read by a new generation of kids from when I started back in the mid-70's. So, apparently, CRACKED feels it's OK to use the same old jokes. Guys...please, pull it out and kick my ass...Please.

Next issue: An old friend returns...It's good to see him.
Posted by Turbot's Finest at 11:10 AM

Unlike the other repeat, I suspect this one had something to do with Bill Ward's status on the magazine. He's nearing the end of his run at this point (his last regular Nanny would be #203, I believe) and interview repeats begin to become the norm (some of them reaching all the way back to *Bob Taylor* era Nanny).

I do agree that this is not a great issue (though I *did* watch both Simon & Simon *and* Remington Steele back in the day).

There is a sense of winding down going on here. Unfortunately, rather than provide a jolt of new energy, #213 ushered in a Severin-less period that probably drove people away. The new distribution chain didn't help, either, as #212 was my last issue as well. (At the time, I didn't even realize it was still being published until issue #230.) Things get back on track at about that same point, right around when Don Martin joined. Then it's a longer, slower decline until the multiple owner shifts dragged the once classy mag into the gutter of fart jokes and pandering to Howard Stern.