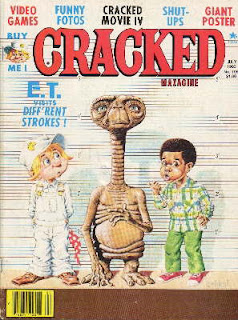 POSTER: $50.00 in a wallet was found and some other stuff...OK, well...Maybe the poster isn't such a good one. Let's keep moving...let's not let the filler weigh us down here...

LETTUCE FROM OUR READERS: Next issue - April 19th, 1983. "Dear CRACKED, CRACKED #194 was the first time I didn't laugh at your cover, but loved it anyway. Both that and the accompanying article...were a fitting final tribute to a truly great TV show. I'll miss it. Scott Morrill Elmira, NY" Amen, brother

Woah! "SPECIAL ANNOUNCEMENT - At the request of thousands of CRACKED readers we have formed the OFFICIAL CRACKED FAN CLUB." Holy...For $9.98, you get an official membership card, a special decoder "that will enable you to read the secret club messages appearing in every issue" and 10 issues of Cracked AND a Flying Disc! And, being a CRACKED fan continues to be awesome!

IF EaTing HAD BEEN FOUND BY ARNULD: It's more or less what you'd imagine. Arnuld smuggles ET around in various outfits including a large afro wig. Woolies's response? "Holy moley! It's Aretha Franklin's mother!...Wrinkly old broad!" They goof around a while and then get EaTing back to his bus...and the ratings for Diff'rent Strokes shoot through the roof. Yeah, this bit is a lot of fun. It is exactly what you'd expect and, possibly, something you could have written yourself but...I don't always want to wander into brand-new worlds. Sometimes I just want to sit peaceful and warm and cozy...That's what this article is. A joy...The last appearance of Diff'rent Strokes? It night be. That would be sad.

CRACKED GUIDE TO SKY DIVING: This is a reprint from issue #130. Well, the same things I said there stands here. Except...this joke...A man is buying a jumpsuit. "May I suggest one made of 100% duck down." "Sorry...no duck down. It may cause me to quack up."

THE PEOPLE'S COURTROOM: Great bit...Judge Irving Horsenagel. It's all kind of dull and boring (unless you love court shows) so after three pages...

THE ALL-NEW PEOPLE'S COURTROOM: Milton Mudflaps & Sondra Pitface...Dancing gals, lots of lights, a "Judgement Wheel" It's pretty awesome...The whole article (both halves) have a freedom and a roll to them. It's nothing I can spell out here because the jokes are all the same...It's the layout, the art and the variation in the panels. I don't know. I like this bit a lot.

WHEN MEN AND WOMEN SHOP: Oddly enough, most of this is kind of true. The sexes do shop in different manners. A few of these (the woman trying on a thousand pairs of shoes and the man in the gun store trying to buy slippers) are cliches but many are spot on. Men get embarrassed buying women's underwear. But, women don't get embarrassed buying for men. Women use shopping carts more than men. At three pages, well, this one may be overstating it but, even if it isn't funny, it's rather charming.

Am I drunk? I'm getting a real kick out of this issue.

I am not drunk. I wouldn't be able to write if I did.

I could be high, though.

A CRACKED LOOK AT A SUPERMARKET: OK. Another reprint. From issue #115. Oddly enough, the one with the first appearance of M*A*S*H on it. The one pictured in the previous post. How's that for coincidence? What's going on CRACKED? Don't you release large numbers of reprint issues every month? What's with the double-up? Something to do with the approaching Issue #200 perhaps?

THE CRACKED MOVIE IV: Little Miss Sunshine done by CRACKED...Not meaning to be a jerk, but this is as good as that movie. Mr. Sproul invests all their money in Rubick's Cube Dusctovers...it bombs so they need $25,000. So, Sylvester's Girlfriend Eva is being entered in a beauty pageant. So, the normal crowd of goofballs set off by train to go to Splunkville, Iowa...but the train breaks down so they have to hitchhike and, after some wackiness, they arrive at the big pageant. What happens? Read it and find out. This is better than III. On par with Part II but not as good as the classic first one.

(I'm lying. I don't remember what the first one was about. Was that the world-wide race?)

ABSOLUTELY, UNQUESTIONABLY, POSITIVELY, UNDENIABLY, THE VERY, VERY, LAST OF THE CRACKED LENS (and we really, really mean it this time, for sure!) Part XX: The best one. A huge battle is going on in a field. In the foreground, a man is waving his arm. The balloon reads: "That's it, guys! The war's over! Thanks for coming. You can all go home!" 4 pages of the usual awesome.

HOW TO BEAT THOSE VIDEO GAME PLAYERS: "At Last...Top Secret Strategy For Machines Like Yourself That Are Serious About Gobbling Up Coins!" The actual guide is only 2 sideways pages but it's charming. All about how video games can make players lose. Secreting oil onto the buttons. Flash subliminal messages "Your Parents want you to do some chores" onto the screen. Flash pictures of food. Use your "inside phone" to call a truant officer. i don't know what an "inside phone" is but I love it so much. Another fun, brief bit.

LIFE IN THE 21ST CENTURY: Like the man and women bit, this one is kind of true. Shopping by computer. Sports players will be extremely pampered and get everything they want. All the rock groups that ended in the 80's would be back, The Who and The Rolling Stones. Again...nice.

CRACKED INTERVIEWS THE AUTO KING: Holy Irving Krud! Another reprint! This is from issue #109, July 1973.

TOTAL: Ride My Face To Chicago!

BACK COVER: SAGEBRUSH...well, he hasn't been that funny for a while. I'd hesitate putting this on a back cover. Why buy it if all the gags are going to be like this? Luckily, I did buy it.

I thought this issue was pretty great. The hits overwhelm the misses. We are entering the New World of CRACKED in high style. I can't wait to see where we go next.

But, the reprints are a bit worrisome. 52 pages total (counting front/ back covers and inside covers). 11 pages of reprints. 21% of this issue is reprinted articles. The hell? Is this the beginnings of a trend? (Not to Overnerd it but if you don't include the covers...it's 11 pages of 48, which is apx. 23%, almost one-quarter of the issue.)

Next issue: The New World meets the Transitional World. I want to see where this is going to go.
Posted by Turbot's Finest at 9:37 AM

I was always surprised they got away with devoting every cover to either Star Wars, Mork, The Fonz, etc. Almost like an unauthorized adaptation.

I still remember with Cracked Magazine # 241 Dec 1988 Roger Rabbit. I liked this edition even I sill save them. I am one of the fans of Cracked since the 80's magazine because it has a very high sense of humor. It would be very pleasant with the official Cracked fan club.
As Red Golem, John Severin was very amazing. He always shows beautiful art in every edition.