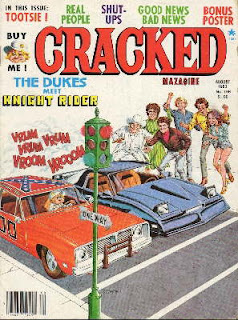 
Everyone new is here and having a good time. And, of course, Tootsie is here, too. I imagine the rednecks of Hazzard love their cross-dressing Jewish soap opera stars. Regardless, everyone is teaming up and having fun. Let's go in. Did Daisy Duke wear high heels on the show? I don't remember.

I will say, as we approach the Poster, that this issue is the most beat-up CRACKED I own. It's crinkly, as if it got wet and it's strangely stained.

POSTER: The Cracked Ear Chart - Close eyes, Cover 1 Ear and try to listen to this chart. It's a very elaborate joke. And, I'm not sure it's funny. I'll get back to it, if I remember.

TABLE OF CONTENTS: Noah C. Goode is the new Italian p rrrrder. "Any second now the light will turn green! With the squeal of tires and roaring engines the cars will race off the cover. (It's gonna look pretty empty!)"

LETTUCE FROM OUR READERS: Amos Svaboda is back! The Official Cracked Fan Club continues to haul in the members. Next issue - May 31st, 1983.

NIGHT RIDER MEETS THE DUKES OF HAZZARDOUS: Nothing like being as literal as possible in the title. And, it's all true. The Great Food Caper is causing all sorts of trouble for the Duke Boys but, with some help from Mike Night, they will stop the bad guys and save (or Svaboda)the day and raise everybody's ratings. Strange, this opener didn't do much for me. I think it's because the jokes here are the exact same as the jokes in the previous parodies of these shows. They're just combined so there's no feeling of anything but going through the motions. Hmm, I wish I liked this more but I don't.

THINGS YOU'LL NEVER SEE: A 3 Foot Bully! A teacher whose belief is "Homework teaches you nothing..." A dentist says "This is REALLY going to hurt!" Two pages of this. Some of them are OK but they're all very obvious.

I guess when the issue starts off a little off I have a tough time catching the wave.

GIFT CATALOGUE FOR TEEN-AGERS: Video Games! Hey! There's 4 pages of this.. OK, it's not all video game stuff. Buy a Video Game Rear View Mirror so you can see a truant office approaching. Wear an S.O.S. Beanie Cap. Put it on and the Change Man knows to run to your side. Buy a Steel-Toe Kicker robot to kick malfunctioning vending machines for you. Stuck With A Super Ugly Blind Date? Well, CRACKED's got it solved. Check it out!

My favorite: Tadpoles to put in your brother's water bed.

It's a fun bit. I'm hoping we can keep it at this level.

READ BETWEEN THE LINES!: Well, we might be losing it again. It's only one page so it barely registered in my mind. A doorman says "It's not easy getting a taxi in this rain." to a snooty man. What he's really saying is, "But slip me a few bucks and I'm sure I'll get you one." Not a good article, not a bad article. Just a page in a magazine.

REALLY REAL PEOPLE: It's basically gags about modern society with captions like "THE UNBELIEVABLE!!" & "THE ELECTRIFYING!!" above them. It's a fun idea. But, underneath each picture, there is a full paragraph explaining what the person did. And, sometimes it doesn't quite seem worth it. You decide.

My favorite: "IMPOSSIBLE ACTS!!! It was revealed today that in Captain Video's video arcade in East Rockaway, New York, the PAC-MAN game there has NEVER been used. In fact, Jack B. Quick, the dumbfounded owner has replaced the game with the complete works of Homer and the kids are lining up at 25 cents apiece to read the Greek classics."

My least favorite...Actually, I don't have one. They're all at the level of the one above. I just think there's too much text for what should be simple jokes. Almost like the concept got away from the writer.

INDICATORS IN OUR LIVES WE COULD REALLY USE: A series of meters and scales that we could use in our everyday lives. A "Mugging Chance Indicator" in case you get lost in a big city. "Girl Date Meter" The girl wears it on her chest and it goes from "Anytime, handsome" to "When Hell Freezes over". "Bad Breath Analyzer Caibrater" and the "CRACKED Magazine Humor Rater" and the "Bureaucratic Hassle Indicator" are all fun. This is a charming bit. I like this one. I don't need a lot of clever. Just a touch.

"GOING OUT" SIMULATION KITS: Shall we take a mad journey back to the days when King Kong reigned supreme in CRACKED? Because, that's where this bit's taking you. Issue #139 reprint here. Oh well. It's still a funny article.

THE AD WAR HEATS UP: "The Muleboro cowboy eats quiche!" "In these tough competitive times some businesses have taken to ad campaigns that lambast the products of their rivals. First, it was Pepsi that took on Coca Cola, and now Burger King has put the knock on McDonald's Big Macs..." "TIME is Time but NEWSWEEK is News Weak". "The Santas at Gimbel's Have Bad Breath! They also renege on 89.2 [sic] of their promises." from Macy's. Pretty funny bit. At two pages, it impresses and goes...

"THERE'S GOOD NEWS...AND BAD NEWS...": Why did the Ad War leave so quick for this bit? Lots of quick bits in this issue. Another clearinghouse issue? They seem to have this about once a year. "It's good news when...You win a stuffed animal at the amusement park's balloon-dart game." "It's Bad news when...You needed 67 dollars to do it." "It's Good News when...At the age of 40, you still fit into your wedding gown." "It's Bad News when...You were a fat, dumpy bride." OK, some of these are funny. But, the layout doesn't encourage much. Four columns on each page. Two good News columns and two bad news columns on each. It's not so nice to look at. But, at two pages...

THE CRACKED GUIDE TO PLANT CARE: OK, before I begin...I have to ask. Have you seen this one? In the article title, the word "CRACKED" is in a box and is a different font and size than the rest of the words. Why is that? Was this someone else's guide to Plant Care and CRACKED co-opted it? Seems strange...Three pages about plants and gags about plants. Weird, this feels like a reprint but I don't know if it is. It's an OK bit. Nothing spectacular. A lady puts her "Lithuanian Laptick" in quicksand and it keeps disappearing. "Grow, or I'll pull you out by the roots!" "But, why?" says the plant, "I'm rooting for you!"

HOW TO HAVE A FUN TIME ON EARTH: A guide for aliens. Earth is open every day of the year, rain, shine or snow. It's all "satire" of a CRACKED variety. Go see "Earth's Devastating Indoor Demolition Derbies"...hey! We're in supermarket and it's crazy! Fun gags to play on earthmen..."Cause vending machines and phone booths to jam." "Plant numerous phoney 'Big Foot' prints." Hmm...this is 5 pages? Why? There is a chapter (Number 6) on where to obtain Reese's Pieces. Haven't they done this with R2-D2 and ET already?

CRACKED PREDICTIONS FOR THE NOT-TOO-DISTANT FUTURE: There will be a faith healer game show called "Let's Make A Heal". Gas prices will be so high that families will trade in their children for gas. And, it is laid out in a CRACKED LENS-style, with the wacky picture matching up to the caption. It's like their Believe It Or Not articles. Some funny pictures here. Santa shows up.

Hey, where is the CRACKED LENS?

TOOTSIE ROLL: It's a Tootsie parody. I know Tootsie was extremely pouplar but, starting the issue with Knight Rider and The Dukes and ending with Tootsie...would that have been awesome for the average 10 or 11-year-old...I'm bored looking at the first page and this thing is 7 pages long. Let me have another look...

I'm back. Yeah, it follows the plot of the movie closely. Maybe I need to see it again. Maybe I was the wrong age. I never really was all that thrilled with Tootsie. I'm still not. The best bit is the kind-of-disturbing final panel. Stallone dressed as "Rockyette". Burt Reynolds dressed up for "Smokie and the Cutie". Tom Selleck in a dress. It's kind of funny but makes me feel strange...

These never lead me astray. Joy!

BACK COVER: The Truth About Pac-Man...Funny page. Pac-Man moves all over the cover. He eats cherries, strawberries, peaches, apples, grapes, bells, pretzels and keys..."The main thing everyone wants to know is where do I go when I use one of these side exits..." Restrooms! "...the same place you'd go it you'd just eaten all this junk!!" He is flying towards the "Pac-Men" room. Great closing gag!

OK, this issue was definitely uneven. A lot of short articles and then an interminable film parody. I guess, in the end, this is a completely average issue of CRACKED magazine. Some great bits, some vague bits, some bits that do nothing. And, a reprint. (Hmm, why the reprints?)

That's why we love CRACKED, I guess.

Next issue: Another team-up...and the new Cover guys for CRACKED...Guess...

I knew I'd forget about the Ear Chart.
Posted by Turbot's Finest at 10:15 AM