CRACKED #191 They really are predicting the future 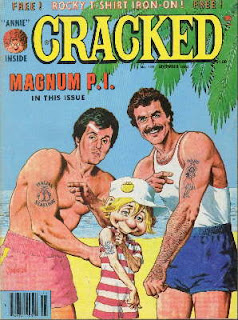 I enjoy that cover. I don't love it. I like it. It brings a smile to my face and I carry on. There's really not much to it, apart from the joke. The background does look lovely. Magnum P.I. and the motion picture Annie...Two parts of my childhood I kept trying to ignore. Let's see how this goes.

POSTER: Scratch 'n' Sniff Poster...A good gag. But, the poster is only one page...Might there be an iron-on? You bet your fat one, Mamma!

TABLE OF CONTENTS: Luke N. Cee is still the pruf r-d-r. Boy, they sure can't spell that right, can they? Sylvester with the Annie wig makes it look like he's got a big afro on...It's fun...

LETTUCE FROM OUR READERS: No sign of the "Next Issue" box. What the hell? The "EVA" contest winners are in...

Ricky Jones (the Hulk's pal?) from Baytown, TX
Rankin McDaniel (a name I might make up?) from Vista, CA
Clint Davidson (a fey Old West gunfighter?) from Sumner, WA

MAGNUMB Public Idiot: My mother-in-law loved Magnum. I always had that hour long American drama problem. I've gone into this before but...Sitcoms are all about the jokes...they can structure themselves however they want as long as they get the jokes in there. At this time period, hour long dramas (with the exception of the Soaps) was all about the drama. And, most drama, is structured in the same way...and so the average drama episode is more like every other average drama episode than the sitcoms are...The sameness of the plotting and the structure used to bore me silly...it sort of still does...

Anyway...Magnum...Running around, goofy gags...Hawaiian shirts...This bit's an OK start to the issue. But, I never paid that much attention to the show so I don't know all the cliches...But, if I were a Magnum fan, I'm sure I would love this. I just emailed a copy to my mother-in-law. She'll respond when she can.

EXCLUSIVE OFFER!!: It's a very funny ad for "The Sylvester P. Smythe Treasury of Every Joke Ever Made!!" Love this page! I wish I could put this one up... You get all the riddles, puns, poems and limericks...

There was a young lady in Rome,
Who was asked how her mom
felt back home.
"I've been gone from the Igloo
The Whole summer and fall too,
But Alaska when I get to Nome"

I do also like "Admittedly there have been a few clinkers (especially during April of 1651)..."

IF T.V. WARNINGS APPEARED IN EVERYDAY LIFE: Pretty amusing...The Klags Arbor Day Album "The following album contains boring melodies as well as trite lyrics all performed by musicians incapable of playing more than two correct notes per song." I wonder if CRACKED still hated those rock 'n' rollers even at this point? I wouldn't put it past them. On Magazines "Danger! The contents of this magazine has the ability to either A) render its reader helpless with laughter or B) turns its purchaser into a seething hulk after discovering what he's paid for." Guess which magazine?

ABSOLUTELY, UNQUESTIONABLY, POSITIVELY, UNDENIABLY, THE VERY, VERY, LAST OF THE CRACKED LENS (and we really, really mean it this time, for sure!) PART XVI: Fun, as always. Oddly leggy.

UPS
Now...OOPS - Obviously Obsolete Parcel Service - they nailed that one

MPG
MYPIG - Mileage You're Promised in the Garage

The drawings are nice and chaotic. I enjoyed this.

FUTURE ALL-STAR TV SPECIALS: "The Network Bake-Off The Stars" Cindy Williams vs. Mike Wallace! "The All Star-Medical Special" (right after "Bambi Gets Lucky") has Burt Reynolds and Loretta Swit performing surgery of sorts. "Political Debate of the stars" does feature Gary Coleman and The Duke Boys. "Celebrity Courtroom" has the Bee Gees in it! "And we ask you not to convict our client but allow her a few more years of Staying Alive Staying Alive!" Oh yeah...This article is madness. Crazy art, lots of nutty dialog...and Linda Lavin.

CRACKED'S CARTOON SHOWCASE FEATURING JEFF KEANE: This issue has been rather nutty. There's a chaos in it that doesn't show up in a lot of these issues. Normally, I love these one-panel cartoons but...they're too sparse for the zaniness of this issue. On their own, they're great.

ACNNIE: Well, they can't all be great...The two bookend parodies are the weakest part of this issue. I remember watching this over and over on HBO but never really liking it...Why the hell did I watch it? Acnnie starts off saying..."Do you know me? I'm not Karl Malden or any of the other unknown stars they use on those American Express commercials." Would adults who understood what she was talking about be reading this? It's a great act of faith on their part...And, possibly a greater act is the fact that this is 8 pages long! Is that the longest article/ parody/ bit in ages? 7, sure. But, 8? Why 8? I don't think it deserves 8...it goes on and on and there are some good moments, mainly involving Daddy Warbuck's head...but, there are also a lot of rotten puns and it does go on...Bring back the interstitial articles!

MORE BELIEVE IT OR NOTS: Well, the chaos is gone. They really are loving this bit lately. "Retardo Montalbaun stood at a railroad crossing waiting for the 8:02 for nearly 2 weeks before passerby finally told him the train had been out-of-service for years. BELIEVE IT OR NOT." And, there is a still...I wonder whose job it was to pick through all the stills for hours on end for these bits?

THE CRACKED SOCCER QUESTION AND ANSWER BOOKLET: This was around the time when I played soccer...This booklet taught me many things. It starts with "...what immediately comes to mind when we say 'soccer'?" And, yes, there is a drawing of a large man punching a woman hard on the chin...Classy Town! It is a rather fun booklet. Lot of questions with goofy answers and wacky illustrations.

Ask your first question
Q: Gee is it really my turn to speak?
A: Sure is.

Q: I've never been in a magazine before. Feels Strange. H Ma! Hi Uncle Irving! Hi...
A: Could we dispense with the hellos and move on to the business at hand?

Q: Sure. Sorry. Ah, what's this sports article on again?

Actually, these bits are pretty amusing. Wow! Having Fun With CRACKED!

WHEN ALL BUSINESSES GO AUTOMATED: The ATM had just appeared and now:

I love the technology based bits. The joy of an "Automated Teller"! and all these great follow-up ideas. These are as wonderful as CB bits or Pet Rock articles. Seeing Pop Culture and Our Culture in these parody gags in a cheap humor magazine is so much more fun than reading up on the history. I didn't use an ATM in 1982 but I'm filled with deep nostalgia for these automated things we almost had. Thank you, CRACKED.

CRACKED INTERVIEWS THE USELESS PRODUCT KING: Sole Grippers turn slippery soles into no-slip grippers. A Fuzz-Eater removes lint and dirt from any garment in seconds. Personalized Dog Stationary! I get the feeling that as useless as the products here might be...we've topped them many times over. These items come from "General Arnold's Rubber Band And Gadget Emporium"...Are you up on your acronyms?... Nanny rips her stockings. The New Silk Weave Stockings are applied. Silk worms spin new ones...and we see the top of Nanny's thigh-high stockings...The All-New Late-Night CRACKED. CRACKED don't work blue! This is a goofy article...and I liked it.

The first three are checked off...and it wasn't until 2006 that this joke was completed. Wow! This is one of the coolest CRACKED jokes ever....

GREAT MOMENTS IN HISTORY: Let's be honest...after the iron-on, this is bound to be a letdown...but, the man who builds the 1st house but forgets to invent a door is amusing.

Great issue. The parodies let it down but they do that a lot, in certain eras. This one is chaotic, funny, stupid, intelligent and psychic...What more can CRACKED do for you today?

Next issue: I bet you were wondering when this little "guy" would show up.
Posted by Turbot's Finest at 8:46 AM

I really love your Cracked magazine reviews. I'm a humor magazine collector and I have all the Cracked magazines you are reviewing so I am very familiar with the features. Like you, I grew up reading the magazine. As such, I would implore you to consider not stopping your reviews at issue #212, and rather, continuing on. I understand why you are stopping there, but you might find that you like the later Cracked magazines much more that you thought. I have collected all of the issues from 1985 to the last issue in 2004 (most of which I hadn't read as a child, I initially stopped reading in 1991), and enjoyed almost all of them, possibly even more than the '70's and early '80's issues that I grew up with (although they are classics). This being said, #213 and #214 are two of the worst issues ever published since Paul Laikin intially took over the editorship and rehashed his old jokes and concepts from decades ago. However, starting with issue #215, approximately half of each issue is great while the other half stinks, because Mort Todd began to take over the magazine. Around issue #218 or so when Mort took over the full editorship (as Michael Delle-Feminie or something like that), the magazine underwent a complete revitalization and I think the issues of 1986 to 1990, under his leadership, may have been the best ever. He brought back some of the old features, kept the best things about the magazine, and introduced new elements which were fantastic. He pretty much eliminated the dull Mad-like elements and really made a fresh new humor magazine. Anyway, I would hate to see this blog end just before you get to my favorite issues, and also because I love reading your take on things. I get out my old magazines and actually go through the articles with you in the reviews. Your fan, Tom

I bored myself writing all those numbers. Suffice it to say, I'll decide when I get there.

Thanks again for the nice words. It's nice to know that someone is reading and enjoying.

Have a great day.

Cracked! Always one step ahead of the game!