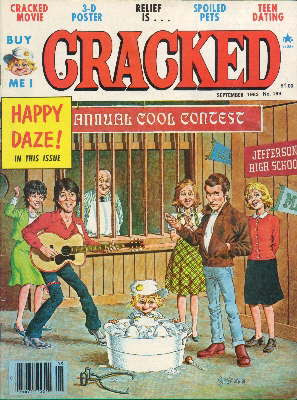 The whole layout of Happy Days had changed since the last time we saw it. When was that? I think when the UFO showed up back in...look it up (September 1978). It was some time ago. And now, the show was at the end of its 9th Season. Richie was long gone. So was Ralph Malph. Potsie had nothing to do. Joanie & Chachi were about to be spun off. The Fonz had been neutered in the same way Mr. T would be in a few years.

But, they were still the Happy Days Family. The show was still in the top 20. People still loved it. It was a pleasant place to go. Now, I want to watch all the episodes.

On the cover, with a full background, Chachi and the Fonz share the space. Who would have thought that Joanie would have been so popular to the show? Strange...I did used to watch the show a lot at this time. I would watch it on its Primetime weekly airing and then in syndication all week.

LETTUCE FROM OUR READERS: Next issue - July 6th. Right after the 4th! A great bunch of days!

HAPPIER DAYS: I love the layout on this. The first two pages is a series of 10 panels along the border...Funzie, Borey Beth, Itchie Jr., Moronion Cunninghamandeggs, Coward C., Ruger (the C's nephew), Giddy Piccallilli, Boney, Cha Cha and Arnuld. To be honest, I have no idea who half those people are but when a show goes so long and it's an ensemble and large chunks keep leaving...that'll happen. I suppose someone who missed Doctor Who for a few years would be extremely confused upon returning.

But, we still loved it. it was still great fun.

Were those the four elements that made the magazine such a winner in the second half of the 70's? Well, they're all pretty much gone now. And, this is very cool, we've been with them the whole time.

A great parody to open the issue. Can the rest of the magazine live up to it?

Of course not...But, let's have a look anyway.

THE TRANSLATOR & THE DUEL: An amusing one panel bit in silhouette. It's an old joke but it's better than a "You Know You're Whatever When You Whatever" bit.

HOW THE GOVERNMENT CAN REALLY SAVE MONEY: Fun. DEFENSE "By recruiting only short servicemen the government can save money in materials. A midget army can get by on: Smaller Uniforms, Smaller Barracks, Smaller Food Rations, Smaller Disability payments." "I want you, Shorty! for the U.S. Mini-Army!" Bits on Social Security, School Aid, Medicaid, Welfare, etc. Not bad.

THE CRACKED WORLD OF TEENAGE DATING: Oh no. This could go horribly wrong. Four pages about the foibles of Foible World, U.S.A. I don't know. We went from a very specific thing in the Happy Days world to this generic stuff...It's OK. But, there is one strip that cheeses me...

A couple sits in a movie theater. They are waiting to see Dracula's Psychiatrist. The young man is very considerate.

"Is your seat comfortable?"
"Very."
"Is anybody's head in your way?"
"Nope."
"Is the person next to you talking so he'll interfere with your enjoyment of the movie?"
"Nope. The seat's empty."
"And there's no sticky candy on the floor or drafts from the air conditioning?"
"Everything's just perfect."

Then, he asks if they can change seats because there's a huge guy in front of him. That's the gag...But, it makes no sense...See Question 3 and the answer above.

MORE PRESS MISTAKES: Funny bit. "Russians are noted for their vodka and their ability to smoke fish." Yep! A Russian is smoking a fish. "Dog for sale: House broken, will eat anything especially fond of children." Yep! A hungry dog surrounded by the bones of children is about to eat another one. Only two pages. Fun.

THE CRACKED MOVIE III: Not as much fun as II, oddly enough. It has a similar plot to the first one. The Talking Blob goes missing this time, instead of Nanny. He's got amnesia and is living on a farm in Topeka. There are a bunch of song parodies and it's in SURROUNDSOUND. It's fun to see everyone goofing around but, it's odd, I don't like it as much as the first two. How did that happen? I think there's a IV around here somewhere. I wonder if I'll like it more.

RELIEF IS: Three pages of this..."Drinking 3 gallons of lemonade at a restaurant, then going to the rest room and discovering..." A man dashes into a Men's room. But, an old lady can't get in the Woman's room...Out of Service! This goes on for three pages.

But, a guy does call a co-worker a "Nerd Ball!" That's worth something. And, a kid tries to flush a banana down the toilet.

GREAT MOMENTS IN HISTORY: A "Foto Funnies" bit. Two pages. Long captions and a little gag in the black & white photo. They're fun. A lot of reading, though. I just had a glance at the front cover of the issue. I miss The Fonz. This bit's all right.

THE SPOILED ROTTEN CATALOGUE: A Twig Throwing Machine. A Walkman Tape Player For Dogs. A Bark Amplifier for small dogs. Tabby's Perpetual Milk Fountain. A Chowhound Beeper Alarm. Some fun illustrations even if none of the items is really all that funny.

THE CRACKED WORLD OF LOOKING GOOD: Seriously, another one of these? Four pages of gags about exercise and name-brand athletic equipment. A man puts a bag over his wife's head. I don't know. Flip it!

GREAT MOMENTS IN TRANSPORTATION: Oh look! A slave being abused! What's with these back covers?

Starts of strong and proud...saying goodbye to Happy Days and The Fonz...then it trails off. But, really, why wouldn't it?