CRACKED #187: Selling Fewer Magazines? Put Everyone On The Cover! 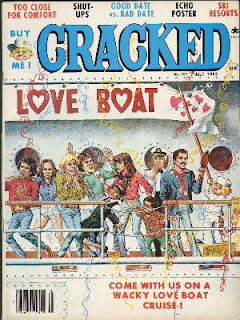 You saw it in the last post. After half-a-decade of solid sales, CRACKED's popularity began to drop in 1981. (Odd, that was when I started to read it.) By the end of 1982, sales would really begin to slide until the middle of 1985. (We'll discuss that when we get there.) But, now, we're early in '82 and the staff are giving it their all. This cover has a background! Granted it's the gray/ white exterior of The Love Boat but there is a background.

And, look at everyone on there:

All welcoming us to a "Wacky Love Boat Cruise!" Let's go in.

POSTER: Yep, the yellow background is here. Brighter than ever. This is the "ECHO POSTER!" Yell something at it and your voice will echo...Check the fine print! You gotta hang it in the Grand Canyon! Oh, the love!

TABLE OF CONTENTS: Luke N. See is still the prueff rdeder. He's kept his job! Bob Sproul is just the publisher. No longer the editor. Marion Sproul is the editor. I think this issue looks fun. I never like to guess until I've been there, though. Although, I guess I just guessed.

LETTUCE FROM OUR READERS: Next Issue - April 20th. Accountant is still there. "Dear CRACKED, Is your magazine inteliigeant?" "What did the drumstick say to the drum?" All these questions. Let's learn from each other.

Oh...According to THE COMIC BOOK PRICE GUIDE, CRACKED Issue. No. 70 is worth 80 cents, and the first issue of CRACKED is now worth $24.

THE WILDEST AND WEIRDEST LOVE BOAT CRUISE OF THEM ALL: And is it ever...There's no plot at all. Everyone on the cover shows up on the Love Boat, does a few gags making fun of the characteristics of their particular shows and then there's a car chase with the Dukes and the Bandit. Lots of bad puns. Some great illustrations of folks being goofy. An exploding pig and Jonathan Winters. Of course, Mork & Mindy was at its very end. The ratings had plummeted and it was going off the air soon. But, it's nice to have them back one more time. And, of course, Diff'rent Strokes was no longer a megahit. Although, it was only halfway through its run. The Dukes, however, were kicking ass. Smokey & The Bandit 2 had come out in the Summer of 1980. The Love Boat was going strong, too. A mix of Current Juggernauts and old CRACKED favorites...possibly some of them appearing for the last time.

WHAT THEY'RE REALLY THINKING WHEN THEY SAY: Oh no...This is no way to run a magazine. These articles are pure filler. Try as they might. As far as I know, this bit could have run 15 or 20 years previously. I don't get anything out of it.

A GOOD DATE VS. A BAD DATE: Seriously? Three pages of more of this kind of thing. The artist is one I haven't seen for a while or at all. That makes me think they have a new artist or...this is a very old bit. I don't remember it so I'm saying it a new bit. So, HOORAY! for the new bit. I wish it was funny.

MORE BELIEVE IT OR NOTS: This is a pretty funny bit. There's a picture of a man on the ground with his eyes closed and one leg in the air. He seems to be tapping on a sewer drain. "Mr. Frank Sonata, a music professor at Boston College can play "You Light Up My Life" on a sewer drain with one leg in the air and both eyes closed! BELIEVE IT OR NOT." It's all stuff like that and it's three pages and it's pretty good. Now, you could point out that all this is is a variation on The Cracked Lens...so that makes a lot of "Foto Funnies" gaggery in this issue...But, luckily, it's something they do a good job with, generally.

COLLISION COURSE: "Ban Guns" meets a hunter. Kermit the Frog with a thin pig meeting Miss Piggy. A dog meeting a dogcatcher...and more!!!! Well, it's one page. It's fun to get that little snap of realizing what the gag is so I can't slander this one.

VIDEO COLLEGE: Taking classes from home via Video! It's sort of amusing but nothing earth shattering. It's the third page that is awesome...The advertisers pitch to people at Video College...My favorite? "Thanks to Slap-On Facial Paint All your Video College Classes Can Be Truly Integrated" You buy these assorted paints and paint your face to make your class interracial. You use "Honky White For Blacks" & "Midnight Mahogany For Whites". "Your home study classes can assume a truly international atmosphere with the addition of Tacos Brown & Won Ton Yellow". The best!

YE HANGS UPS: Oh, it's one page and it's fun. These one panel pages are generally amusing.

CRACKED WORD PLAY: One of them is "The Generation Gap". GENER ATION.
Get it? Two pages of those. I like 'em but I still never get 'em.

THE CRACKED WORLD OF RELATIVES: Oh dear..Well, I read it. 4 pages of several panel strips with relative gags. A little boy thinks that if his pregnant sister has a little girl, he'll be an aunt. A kid responds to a fat relative who says "I remember when you were this high" with a "...when you were this wide..." bit.

I'll detail one of the strips and then we'll move on:

Panel 1: Two fat, mean ladies leave a house. A husband and wife stand in the doorway.
Wife: Well, I'm glad that's over with. I can't believe your cousins Sonia and Clara argued and fought all evening.

Panel 2: Inside, the husband stands looking rather smug. The wife has a tray of dirty dishes.
Husband: Well, it's like Einstein once said. Put two people born of the same blood in the same room and they'll always go for each other's throats.
Wife: When did Einstein say that?
Husband: In his famous theory.
Wife: Which one is that?

Panel 3: Wife is washing dishes. Husband holds up a finger and has a goofy look on his face.
Husband: The theory of Relative-ity!

ABSOLUTELY, UNQUESTIONABLY, POSITIVELY, UNDENIABLY, THE VERY, VERY, LAST OF THE CRACKED LENS (and we really, really mean it this time, for sure!) Part XII: Only two pages? Well, they're funny. Read them.

TOO DUMB FOR COMFORT: I had no idea that this show was on so early in the 80's. For some reason, I always thought this was mid-80's.Started in 1980...ran for three season on the Network and then three(ish) more seasons in syndication. In the end, it became The Ted Knight Show. Hmm...I used to watch this in syndication all the time. It was one of those "Not really all that funny but Jm. J Bullock is pretty darn amusing" shows. That's why I watched. Now, I couldn't even imagine trying it but I'm jaded. This parody is OK. 7 pages seems a touch excessive to me especially when they could have included more "What They're Really Thinking" stuff. I'm kidding, of course. A decent parody but it doesn't match the pure OOMPH! of the opener.

MORE CELEBRITY GARBAGE: The opening blurb above the title, the title and the art around it look very old. But, the rest of the bit is new. I think. The last time they did this was Issue #131 - The Godfather Meets Jaws - March 1976...Would have come out at the end of 1975...The year CRACKED had its largest circulation. Is there any clearer reason why this not-so-funny seems-to-be-ripped-off-from-MAD bit has reappeared? Miss Piggy, J. R. Ewing, The Regans, Howard Cosell...Their garbage is here...

CRACKED INTERVIEWS THE SKI RESORT KING: A good Nanny bit. She really gets cheesed at Mr. Schuss who runs these resorts that really rip people off. She even has tons of film footage to show off things that are skeevy. A cup of tea is 65 cents...but, you use a Universal Tea Bag. The fireplaces are coin operated. 50 cents lifts a metal frame and exposes the fireplace for 12 minutes. Do they make snow? No...they shred paper. They do give everyone Free Snowballs to eat. But, in the end, a film mishap derails Nanny's expose. Oh well. Good bit, though. I wish all of these were like this.

GREAT MOMENTS IN FASHION: This is a good one. Sir Algernon Stewart-Ellsworth III invents the Stove-Pipe Top Hat on 6/11/1857. See it and giggle.

Well, they seem to nail down certain bits, most of the parodies, Foto Funnies, Word Play, but other bits (you know the ones) seem like endless filler to me. I guess if each issue is like an album by one of your favorite bands, then it would be one a band that put out too much material. For every great bit there's a weak bit...that's too bad. I may check out some of the Collector's Editions and Super CRACKED issues to see if they get the chaff out.

Next issue: What else do you do when your sales are beginning to plummet?
Posted by Turbot's Finest at 8:49 AM