Cracked #186: What is the left side of the cell against? 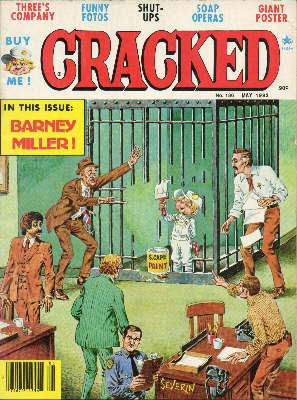 As Barney Miller drew to a close (in its 8th season), the Folks from CRACKED return for one more parody. Fish is long gone. He embarked on his solo career. He was replaced by Steve Hogarth and they're still going strong. Having everyone moving around on the cover is cool. That little peek of a bulletin board on the left is nice. Look behind Barney, on the ground. Moulding. Implying a hallway. All of that is great. But, then you look behind the cell. What's with that green? And, what is the left side of the cell against. Is there a wall there? I can't quite tell. I think there is. Yeah. If you look behind the paintbrush, there is an implied corner. But, still, a real wall is needed for the joke to work. It could have been handled a little better.

Regardless...this is CRACKED, not the ceiling of the Sistine Chapel. Inside?

A bright yellow poster with black lettering awaits us. Some kid had walls in his room that looked like some kind of giant strange bee. I can't imagine any parent being thrilled by this color covering the walls. I'm getting a little nauseous looking at it now.

LETTUCE FROM OUR READERS: The accountant is still a tightwad. There is a Jaws-related SUPER CRACKED on the stands. Next issue - March 9th The Saboteurs & Investigators are all over this. We'll have to talk more about them soon.

BLARNEY MILLER: There are some different cats members but the jokes are exactly the same. Wacky prisoners. Talk of "plots" and filling up their half hours. A guy brings in 100 pounds of squid because he misread "SQUAD ROOM". That one guy is in a designer suit. That other guy is still Polish. Stuff like that. The show would go off the air soon so they were giving it one last go. Somehow it doesn't ring quite as true as giving M*A*S*H a final jab but...If only everyone on this show were nude.

CRACKED'S PREDICTIONS FOR THE FUTURE: Some funny bits. Pictures matched with write-ups. My favorite: A little boy throws money in the air. "A two-year old boy living in Idaho will become the youngest millionaire in American history after winning the Idaho state lottery. (But will end up blowing it all on Tab and the three-year-old next door.)" There is a three-armed Brooke Shields and a giant spider. (Not in the same photos.) Two pages of giggles.

IF T.V. COMMERCIALS WERE FORCED TO TELL THE TRUTH: A good bit. "Bunty Paper Towels" "Poopsi Cola" "Mail-Order Records" "Stanka Coffee" "Alpoo Dog Food" I love the Sam Whitehead art matched with these parodies. The commercials come rushing right back to my memory. This bit actually seems like it should have been in another magazine I used to read as a kid but I don't remember which one. Bananas? Maybe it was. The Stanka coffee bit brings me giggles.

VIDEO GAMES OF THE FUTURE: Great stuff! And, at three pages, way too short. Multi-Movie Maze "Object of game is for player to buy some popcorn at the snack counter, and then return to correct movie from which he exited. Player must avoid getting zapped by hostile crowd at snack counter or being side tracked by video games in lobby." Good stuff like that. The "All-Sports Players Strike" is an empty baseball field. "Nothing happens for entire length of game." The third page has "Custom-made celebrity video games" for Dracula and Billy Martin, Gary Coleman, Mean Joe Greene & Mork. All great, all the time.

THE DIFFERENCE BETWEEN UPPER CLASS & MIDDLE CLASS: Oh well. They're really trying to make a point here, aren't they? What that point might be...I couldn't tell you. Upper class on one side and Middle class on the other. hey! The Middle class struggles and doesn't have as much money as the rich. I truly thought this article might be making a point but it's really just taking up space until the next article...

CRACKED LOOK AT TEACHER TYPES: Oh crap. This is the next article. At least it's only two pages. Mr. Hip is an old hippie. Mr. Buddy-Buddy is your pal. Miss America is hot. Mr. Impossible gives tough tests. Mr. Pierre is bored.

THREE'SA COMPANY: Well, it's got the Whitehead art. But, what is the fascination with really old sitcoms here? Last issue, The Jeffersons. This one, BM & this one, in it's 6th season, I believe. The art is funny but most of the actual jokes (written) aren't, But, Sybill Smythe - Sylvester's younger sister, shows up in the end. "With all their family knows about the janitorial profession, we should really sweep up in the Nielson's now!" There's no real plot. It just kind of goes from gag to gag about the show's make-up and then it ends. It's OK. But, the BM parody was like this, too. Two in the same issue make me a little sleepy.

A PRESS CONFERENCE WITH RONALD REAGAN: In the BM parody, a woman asks "What President Reagan meant about the ketchup?" I think that refers to when the U.S. gov't classified ketchup as a vegetable or something. That thought is funnier than this bit. And, this bit goes on for 5 pages... Nanny Dickering is there and she makes a joke about saving "$1.80". Oh, that tightwad! The Talking Blob is there, too. I'm not particularly chuffed on this bit.

ABSOLUTELY, UNQUESTIONABLY, POSITIVELY, UNDENIABLY, THE VERY, VERY, LAST OF THE CRACKED LENS (and we really, really mean it this time, for sure!) PART XI: Only two pages. As funny as ever...but only two pages?

CRACKED INTERVIEWS THE SOAP OPERA KING: More Nanny. She interviews Mr. Bud Suds. They mention Dallas. Mr. Suds id preparing a show called "Houston". "See the struggles of R. J. Uwing!" I'll watch it. Yep. Soap operas are repetitive and they can make some people cry. It goes on like this. I don't think Nanny's really tightening any screws here. It is what it is. Some funny gags about soap operas although I'd rather be watching Dallas.

Final Tally - MERV!!! I giggled and told my cat to "Shut Up!" There is a strange bit at the top of the page. A little man with a ring and string out of his back. "Pull the ring and hear a very funny joke." What the heck?

GREAT MOMENTS IN EDUCATION: A Pharaoh starts a speed-reading course. Slaves get hurt!

You know, the issue started with an ass-kick and then it faded and sort of just caught back up to itself by the end. Maybe the next one will be better.

Next issue: Finally, we're out to sea! Literally...Come and see the laughs.
Posted by Turbot's Finest at 8:27 AM