CRACKED #185: Right Through The Cover! 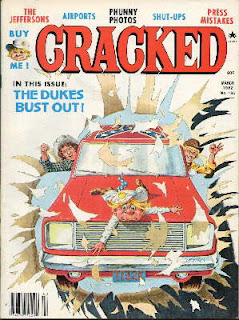 Fun cover! And, for once, the bland background is perfect. If The Dukes are leaping through the air, then the background behind them would be blue. And, they're tearing through the magazine. Granted, there could be something on the white page but I like to think that they're bursting through a blank page.

POSTER: Yellow background...Now, I have to pee. "JOIN THE FIGHT AGAINST METRICS: WE DON'T WANT NO FOREIGN RULERS." This comedy makes me feel funny...downstairs.

TABLE OF CONTENTS: Luke N. See is back as the pr rdr. Lots of writers on this one. I see George Jefferson. Why are the contents always out of order? Is that a joke I missed the set-up for?

LETTUCE FROM OUR READERS: Next issue - January 26th, 1982. The Tightwad accountant is still here. And, there is another "Statement of Ownership, Management & Circulation". Hooray! Average copies printed per month: 728,501. Subscribers: 384, 587. I forget if they're doing better than they were. It's in one the previous entries.

THE DORKS OF HAZARDOUS: Bossy Hog is up to some crazy shit! He overhears Dizzy Dork saying something about hiding her tips in a coffee can. So, Bossy and Sheriff Rascal arrange the "The 13th Annual Round Hazzardous County Car Derby!" No one (including Bob Sproul) can remember the first 12 but Boo & Cuke get pulled in. And, a crazy race ensues as Uncle Fussy is distracted away. And, in the end, Dizzy was talking about asparagus tips and those two daffy dimwits (the law, not the Dorks) go to jail! Ha...The whole thing curves along with some really bad jokes but entertaining art.

How long do you think it took them to come up with those names?

MORE PRESS MISTAKES: Funny bit. "Your husband will be surprised at the great stew that can be made from this new cookbook!" A woman is shown cooking her cookbook. "Look for Sam's Sewer Service under water in the yellow pages!" A man is underwater flipping through the phone book. Two pages of these and they're pretty amusing. Nice bit.

THE CRACKED ANNOYANCE BAROMETER: A little barometer next to each panel. A stone in your sneaker - 47. People who sit behind you during a movie and do nothing but talk - 25. One of them that doesn't have a heading but seems to be The Tonight Show - 17. Take home tests on a holiday weekend - 100. I don't know. I think these sorts of articles are long past their prime. Maybe I would have nodded at these when I was younger and said "Hell yeah!" But, I don't think so.

ABSOLUTELY, UNQUESTIONABLY, POSITIVELY, UNDENIABLY, THE VERY, VERY LAST OF THE CRACKED LENS (and we really, really mean it this time, for sure!) Part X: 5 pages on this one! Panels with guys fighting but the word balloons say "You may not know how to fight, but you're a marvelous dancer." All of it solid...like this bit.

A CRACKED LOOK AT AN AIRPORT TERMINAL: Scan around. Is there a joke about "checking bags" that involves someone putting a big check on a bag? ...Yes, there is. Oh God, I really thought these bits were a thing of the past. They stunk in '77. They stink here.

THE CRACKED MANUAL OF MODERN MERCHANDISING METHODS: Oh, I'm worn out writing that title. "If you give your product an exotic name, you can get more money for it." "Boeuf a la maison" is a hamburger for $10.50 "If you're competing against a tough company that makes a better product at a lower price, buy the other company." You can guess the illustration. A few more bits like this. They're clever observations but the illustrations seem a bit superfluous. Or maybe the whole article is...I think the normal CRACKED way of doing stuff got in the way of this one.

THE JABBERSONS: A Jeffersons parody! Finally! Halfway through its eighth season, we get the parody all America has been waiting for. Although, I think most folks grew up while they were waiting. Why is there a Jeffersons parody here? I just answered my own question...1981-1982 - The Jeffersons was the #3 show in America. Well, the art is fun and they do seem to get the sort of things that the characters were doing on the show. But, generally, the jokes revolve from pokes at the show to standard CRACKED jokes. That's always felt odd to me but...this is a pretty darn entertaining parody in the end. And, Gary Coleman appears.

CRACK UPS! FEATURING THE CHILD PSYCHIATRIST: One panels about child psychology. Not as funny as Bill Keate's stuff.

YOU'RE IN TROUBLE IF...: Oh well, one of these. Or, really, another one of these. "When you look out the window of your airplane...and you see the pilot parachuting by!" Luckily, there are only two pages of these. Move on.

THE CRACKED HISTORY OF AVIATION: Four pages and not bad. A lot of text and a lot of it very obvious but it's a fun read. Normally, my eyes glaze over when I see all the text lathered with the illustrations but here...I liked it. Although, as I scan through to find some jokes to use as an example, nothing really grabbed me. Hmmm...maybe I'm going goofy. it has been hot.

CRACKED INTERVIEWS THE CRACKED MAZAGINE KING: Nanny interviews Robert C. Sprawl (Oh yeah!). And, we see Marion Sprawl and The Talking Blob & Joe Catalanooo. In the end, Nanny interviews herself and puts all the readers to sleep. So, she throws water at us. I woke up. It's a real fun article. We see the writers at work and the artists working with nude models...and all of it seems to be done from the privacy of a small wooden shack in the center of NYC.

I'm going to give this a very rare Thumbs Down. They don't seem like they were trying very hard. Sorry folks.

GREAT MOMENTS IN HISTORY: "Igwar Nagoolik invents reading (Unfortunately, no one had invented writing yet!)

And, a decent issue of CRACKED ends as it began: decently. A fun issue loaded with one to many articles that I would call filler. I would have loved it if they could have only released issues when they had enough material. Of course, they don't come out every month and the ones that come out after a two month break aren't appreciably better than any of the others...Forget I said anything.

Next issue: Wow! This show is still on!
Posted by Turbot's Finest at 10:57 AM

The background on the cover of the magazine looks crowded but it is entertaining. From the cover, it contains of funny story, is not it? I have not ever known the content of this magazine, but after looking at the cover, I am interested in subscribing it.