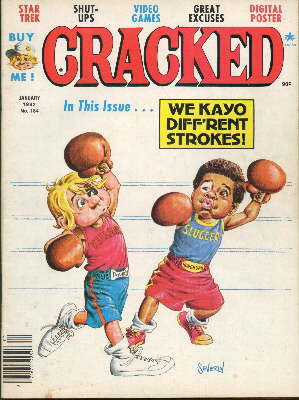 Well, it's a funny cover but apparently the budget for layouts is gone again. Check out that "awesome" boxing ring they are standing in. Three barely defined ropes and a (sort of) line that is the edge of the ring...CRACKED, come on.

Here was what MAD had from the same month... 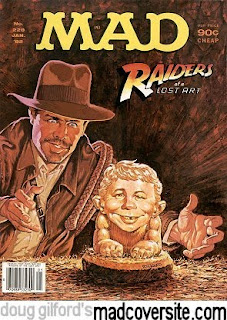 You gotta up the ante. Having Sylvester's face off to the side saying "BUY ME!" seems a touch...desperate. I guess it's these kind of money saving ideas that kept them going for so long.

They sure know how to milk a trend, though.

POSTER: The world's first digital wall scale...Yes, it involves your fingers. Actually, a good joke and it's not on yellow paper.

LETTUCE FROM OUR READERS: "Here's $1.80 Our Accountant is a Tightwad!" A $1.80 discount on 12 issues of this sweet, sweet magazine. I'm sending in my coupon now.

DIFF'RENT STROKES: The title is not changed. This is another one of those straightforward versions of the show. There are a few parody type things here but mostly it's just jokes about Arnold's height and why Kimberly has nothing to do. Mr. Drummond gets beaten up. Arnold wears stretch shocks to help him get taller. There is a joke about "On The Right Track". It's sort of, kind of a parody but really it's here to let kids enjoy a little extra shot of Conold! And, in that respect, it's fun. If you want biting parody or satire, this ain't it, Buster Brown.

ABSOLUTELY, UNQUESTIONABLY, POSITIVELY, UNDENIABLY, THE VERY, VERY, LAS OF THE CRACKED LENS (and we really, really mean it this time, for sure!) Part IX: A giant scorpion. A joke about an old man losing his ear at the barber's. Four pages...and I love it!

HOW DENTISTS CAN IMPROVE BUSINESS: Very busy article. Lots of stuff going on. The dentist dresses up like a turkey on Thanksgiving Day. He endorses tires. Very late office hours. A live band in the office. Folks don't go to the dentist for a good time. It's for their health. I guess this article is fun. Although, as a kid, I probably wouldn't have liked it. And, I don't like it as a grown-up. Hmmm...

THE CRACKED ENCYCLOPEDIA OF GREAT EXCUSES!: There are three pages of drawings of faces giving excuses and I skipped over Pages 2 and 3 and most of Page 1. Not really my sort of thing. Feels more like a MAD thing to me. I certainly don't spot any laughs in here.

CRACKED LOOKS AT PARENT-TEACHER CONFERENCES. OR, WHAT THE TEACHERS REALLY MEAN WHEN THEY SAY:: "Was Joey always this active?", asks the teacher as she points at scribbling on the wall. Which Means: Didn't you ever teach your kids to behave? Not a great idea, not a great article. But, it is only 1 page long so...yeah, it's all right. It took me all of 30 seconds to read and it leads into the lovely...

THE CRACKED WORLD OF VIDEO GAMES: Just some funny strips filled with video game mayhem that I love so much. Where's Blip?! Oh, yes, one guy does play the change machine. Never stops being funny! I wish I could play some of the games in this. "Coast Guard Destroy" "Space Explorers" "Blow-Up" "Zorch Patrol Game" I would have had such an awesome childhood.

CRACKED WORD PLAY: Two pages of those wacky boxes with games around them. You know! "A MILLONEION" is "One in a Million" stuff like that. They're fun but I never, ever get them right.

SORRY! NOT THIS TIME!!!: People basically saying No to terrible things about to happen to them. Pat won't watch the neighbor's bratty kids. Stan won't get underneath the giant piano. Things like that. Some fun art, some obvious jokes.

STAR DREK -- THE LAST HURRAH?: Well, it's just kind of hanging out with the crew as they meet Flash Gordon, Wonder Woman and a bunch of other fictional characters. In the end, the thing feels very similar to a Star Trek parody from a long, long time ago. (#127) All the other shows and movies are pissed at how popular Star Trek perennially is and they try to stop it all by sending the Talking Blob to eat them. If you like Star Trek, you'll like this. Personally, I wasn't thrilled. When does Wrath of Khan come out? In their own non-specific parodies, they have begun to repeat themselves.

FUTURE AT-HOME MERCHANDISING PARTIES: The Mystery Party, The Pet Party, The Automobile Party, The Convict Rehabilitation Party. A lot of word balloons and a lot of words. But, I'll be honest, the effort required to read everything isn't worth the jokes. Much ado about nada.

CRACKED'S CARTOON SHOWCASE Featuring Bill Maul: Pretty entertaining cartoons. They're so straightforward after the business of the last article...they're charming. I'd like to see more of these.

CRACKED T.V. ADDICT!: "You know you're a TV addict when..." You put down this magazine and go watch TV instead. Well, that's not one of them but you can imagine them...

"...your wife says she's leaving you, and you ask her to wait for the commercial!"
"...your list of emergency telephone numbers only includes TV repairmen!"
"...you own a televisions set for each channel...just so you don't miss anything!"

CRACK UPS! FEATURING SAGEBRUSH: Sagebrush, where have you been? It's been ages. Oh, and he's sharper than ever. Actually, it's OK. Better than the TV Addict bit.

CRACKED INTERVIEWS THE FOOTBALL OWNER KING: Mr. Rocky Rush is interviewed. He's got something to do with football. I think my verve for this issue has faded. I see Nanny. I see this guy. I see football stuff but it's not registering. Let me transcribe a panel, maybe that will give you the juice:

Nanny and Rocky watch a bunch of football players rushing up a track towards a speeding train.

Mr. Rush: For example, here are our rushing exercises. Tackling dummies were too soft. They didn't simulate the force of 3 or 4 men coming at you, so I developed this training device instead. It really toughens up a player.

Boy, that guy talks a lot. Nanny looks superb, though.

Wow, this is perfect.

GREAT MOMENTS IN HISTORY: Another "digital clock" joke. Less funny than the poster. I get the feeling that someone just learned that "digital" has two meanings.

Two main features that are nothing but pandering. One that seems very similar to a past article. A lot of short, interstitial bits of uneven quality. Some great art, some not-so-great. It's perfect CRACKED! Read and enjoy!

Next issue: Thank God these guys are back!
Posted by Turbot's Finest at 8:58 AM