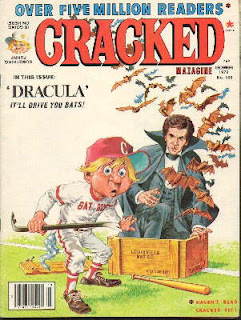 Oh, that version of Dracula! Sure...we've all seen that one. And why not? Another version of Dracula? Give me four. I want to save one for my Gramma when she comes up to visit next week. I have noticed that Sylvester seems to misunderstand some of the cover-related stuff, like the grease and Grease. I guess that's part of his charm. Has he ever been sued, I wonder?

POSTER: The pee color is back! They must have broken the bank with the grey of the last issue. This one is an important announcement that make a jokes about people in Australia being upside down. Wouldn't people from New Zealand be upside down too? Where did this gag come from originally? I think they had this pee-yellow poster in storage. There isn't a lot of life here.

LETTUCE FROM OUR READERS: Ahh, there he is. Hi, Mork. Welcome Seymour to the magazine, please. Here's a revealing letter from David Wayman of August, Maine: "Dear CRACKED, An article on marriage? It was like listening to a 60-year-old comedian. I mean, really! Has CRACKED sold out?" The editor's response is one about Yep! [We've sold out]...on every newsstand in America or something like that but it's nice to see that someone at the time thought "Hey! This is a pile! What the hell is this?" Next issue - November 6th" Oh, and someone does yell at CRACKED for doing a disco article -- because rock 'n' roll rules!

DRECULA - As you may have guessed, I've never seen this version. I'm sure it looks fine. It's got some big actors in it. It's supposed to have some fine effects. And, the book is a good one. So, I can't imagine it stinks. This parody certainly doesn't. It's 7 pages, which might be too long. It's got some good gags and, because it's abbreviating a movie, it moves quickly. Whole scenes are encapsulated in one panel and then we move on. So, the flow is a good one. There is a joke about the Count counting every time someone says "Count!" But, even Drecula thinks this joke blows so there's no worries.

THE RHYME OF THE THIEVING SHEIK: Maybe they should leave this stuff to MAD? In a small town, whenever they're low on oil, a sheik shows up and takes all of their cash. At the end, the town bands together and uses solar and wind power and the sheik goes broke. Wow! That's exactly how it happened! "It's a guy in a bed sheet! Boy, he looks like a nerd!" is my favorite line. I kind of shrug at this article. At least they gave it a shot but...ahhh...

PHOTOON: A pretty amusing one-pager with a baby saying "Cut That Jive!"

GAG LINES FOR EVERY PROFESSION: Wooh! This one stinks! Plumber, School Teacher, Doctor, etc. All of them ladling out the bad puns. So, I thought I'd transcribe one. I couldn't decide between Plumber or Travel Agent so here are both:

PLUMBER:
LADY: So what seems to be the problem, Mr. Plunger?
PLUMBER: I've gotta turn your water off for a month while I locate a new washer I need to fix your pipes. Now, I know what you're wondering "WATER we gonna do?"
L: WELL?
P: Yes. You could dig one.
L: But, Mr. Plunger!
P: This sort of reminds me of what the faucet said to the sinkful of water.
L: What was that?
P: You ougtha be in pitchers!
L: Well, couldn't you fix the pipes some other way - maybe clamp them together?
P: Do I look like a vice guy to you? Trust me.
L: Well...OK...
P: Boy, are you dumb! Anyway, like the dry cleaner said to the shirt, "It's time for me to press on." See ya!

TRAVEL AGENT:
TRAVEL AGENT: Well, HAWAII!!
LADY: Fine. My husband and I wanted to know if there are any trips available to Bora Bora?
TA: VENICE if convenient for you to go?
L: In March.
TA: ODESSA laugh! KENYA go in October? March through September is very popular.
L: I'm afraid March is when my husband gets his vacation.
TA: LIMA check it out for you. I'll call the woman at the airline and ALASKA WATTS what.
L: Excuse me, but do you always talk in geographic times?
TA: TIJUANA know why I BABYLON like this?
L: Why?
TA: IDAHO!!

When did Forrest J. Ackerman join the writing staff?

BIG-TIME PROFESSIONAL WEATHER FORECASTING KID!: A one-pager. It's packed and it's amusing. I don't want to give too much of this away. Find it and enjoy.

THE VERY LAST OF THE CRACKED LENS: Another kick-asser. 5 pages of good laughs. An aside: There is one still here from a movie that I must see. "I know I haven't had much success with this trick but don't worry. I think I've figured it out." It's a big, castle laboratory-type room. There is a woman on a slab of some kind and a man standing over her. Spread out across the ground, there are bodies. But, bodies that have their heads and hands obliterated. It's actually a really dark and unpleasant photo and I'm dying to see the film. What might it be?

YOU'RE REALLY OVERDOING IT A LITTLE WHEN: I'll let a better man than me detail this bland one-pager. These sorts of articles are starting to wear me down.

THE CRACKED WORLD OF LINES: Too bad. We were really cooking along fairly nicely. Four pages of line gags are tiring. Although, the guy waiting in the long line for the disco who looks about 50 and says "I'm 35!" made me laugh He's 35! How old were 35-year-olds back then? I'm 36 and I still get carded! The hell? I'd actually prefer another disco article to this one.

MIRACLE WORKERS THE WORLD HAS NEVER HEARD OF ('TIL NOW): A Murphy's Law thing with fun art. A guy who can make it rain. The moment he starts watering his lawn - it pours. A lady can make hundreds of men appear out of nowhere - by wearing her bikini. Things like that. Not a bad article. Worth a first read because, although it is cut from the same cloth as the two previous bits, it has a little more life. And, that lady in the bikini. Va-Va-Va-VOOOMMM!!!

CRACKED'S GUIDE TO UNDERSTANDING YOUR PET: Dog and cat and fish and hamster jokes by the score. I liked the hamster smothered in lettuce and the turtle strapped to the top of the toy train. Those are yukks. The rest of it is OK with some amusing drawings (the bunny emotions are great). This issue is starting to tire me a bit, unfortunately.

SPORTS SILLYSTRATED: The article is very text-heavy but it's got laughs. The picture of the entrants in the 50th Annual Slog City Knee Holding Competition is my favorite. This has a touch of Cowtown to it. (Remember that?) Some Olympics jokes. Jokes about guys sweating. The issue is slowly regaining steam.

NEVERREADY POWERCELL AD - A one pager and the funniest bit in this issue. Reminds me of Aunt Dinger's Sauce from the last issue. Funny picture. Funny ad line. Funny text. Good one.

CRACKED INTERVIEWS THE GAME SHOW KING: Nanny is back!! And, she's talking with Mr. Chuck Embarris, who runs all the big game shows. Basically, he's able to humiliate people left and right because his game shows have systematically lowered the IQ's of everyone in America. Pretty sound, I think. Oddly enough, Nanny doesn't really call him on it. Hmmm...Did Nanny get paid off? Is that why she wasn't here last issue? I wonder.

Total - They Saved My mother-in-law's brain!

BACK COVER: One-pager called "One Night at the Garden". Pretty good gag. A nice issue closer.

Odd. This one has some excellent highs but some bland, bland lows. Why? Why? A little more effort would make the whole issue sparkle. There does seem to be a little less BLAND on this one than the last one so Hope Springs Eternal!


Next issue: Some old friends are back. But, possibly, not the old friends you're thinking of.
Posted by Turbot's Finest at 8:52 AM