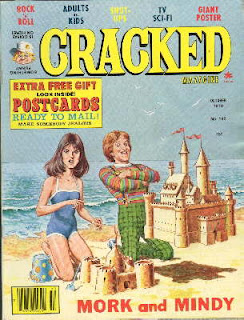 Hey! Look at that cover! Apparently, in October 1979, Mork & Arnold Drummond were the only things happening in America! Ahh, well. Who cares? I love 'em. And, Mork will be gone soon. Enjoy it while you can. Pop Culture is fickle as shit (if you'll pardon an old French Canadian saying).

The poster says "FIGHT INFLATION...AT ANY COST!" It's bright yellow and, I guess, they don't always have to try to hard. We love them anyways.

TABLE OF CONTENTS: "Rita Righta - prf fder" Nice. It looks like a good issue coming up. I've got my Comedy Pants on and I'm ready to cook!

LETTUCE FROM OUR READERS: The letters are fine but...I've just put in a order for an offical CRACKED REPROTER T_SHIRT! $5.95, awesome! I can't wait to wear it. I'll post a picture when I get it. Next issue: August 14th

THE RETURN OF MORK AND MINDY: It's just like the last few issues. More an actual story with some brief moments of parody. Until, we hit page 4 (of 7) and every kid's dream begins. Barnold shows up. Barnold Drumming! Now, we've got Gary Coleman and Robin Williams in the same article, not just on the same cover. And, it's awesome.
Baronld: Got any soul food?
Mork: Sure--
Mork holds up his foot to Barnold.
BARNOLD: Forget it! I'm liable to get toe-main poisoning!

Then, Mork takes over for Mr. Drumming and becomes a Dad! And, Barnold calls him a "Sucka!" Oh, if only Fred Sanford was in this, too. Is it the funniest article? Not really. Is the concept better than anything since the Fonz got visited by a UFO? Damn straight. Read and enjoy.

CRACKED'S INVENTORY OF PERSONAL SPENDING HABITS: You know you're a Cheapskate/ Spendthrift When... I've never been a huge fan of these sorts of artciles and this one doesn't convert me. "You spend more on a long-distance call than the fare it would take to fly there!" Guess which one that is? "You go to a museum and they don't have a postcard shop, so you buy a painting instead!" "You trade your dog for a few chickens so you'll have free breakfast egss!" Guess and guess. I can do this all day but...

AND YET ONCE AGAIN STILL EVEN SOME MORE FROM THE CRACKED LENS: This one is four pages of mirth and it has a still from "Brewster McCloud" One of my favorite films. Where's the DVD? This is always a pretty solid series. And, this article is no dfferent. It touches my funny bone and jiggles.

COLONEL JIM DANDY'S GUIDE TO GOOD MANNERS FOR DISCRIMINATIN' COWPOKES 'N' BUCKEROOS: Great title, huh? I love the illustrations in this one. 100% Pure Whitehead. There's a big sexction on "Courtin' and a Squirin' Womenfolk". A bit on "Hospitality and Table Manners". A page on "Engagement and Hitchin' Ceremonies". It's mostly cowpoke jokes and such and I'm not sure if it's actually funny but it's got a real nice flow to it and sometime that means a little more.

ONE DAY IN THE NORTH WOODS: Pretty decent one-pager. A tree and a toothpick.

SUPER PEOPLE: People magazine for Superheroes. "Dr. Marcus Chung demonstrates special acupuncture he employs to cure Super Heroes of their aches and bruises." This involves a sledgehammer to the lower back and, oddly, a really hot nurse with a short skirt that either shows of the bottoms of her super outfit or her panties. I can't figure out which. Here are the heroes we meet:
The Green Zephyr shows you how to be a cheap date.
The Blue Funk - who works as a Super Market Price Changer
The Purple Peacock & his fashions
Kid Demon and his sandwich delivery. (He flies to your window.)
The Fuchsia Minx & The Azure Hunk and their honeymoon.
The Silver Wrench is a great golfer!
The Green Kangaroo skies up Mount Everest.
The Purple Pelican lets his kite fly in.
Captain Drizzle hunts without bullets! (Read it and find out.)
Sgt. Sonic is a boozer!
Major Dynamo spins around on disco floors, putting on a great light show.

They're great, aren't they?

HOW ADULTS DRIVE KIDS NUTS: Two pages and they seem to be a long two pages. All the jokes they use here are ones you could have thought up on your own. And, the drawings aren't even that interesting. This one (along with the cheap/ rich bit) seem like filler. There seems to be a great issue bursting out but it keeps getting restrained by these day-old articles. They're hard, crusty and a little moldy.

HOW TO IMPROVE YOUR...ah...ah...MEMORY: Are you having trouble with your memory? Can CRACKED help you? Darn straight! The very interesting thing abut this one is on Page 34. There is a section on remembering a phone number an atrractive woman or man gives you. The drawing of the woman doesn't seem to be finished. At first glance, she seems to be naked. A second glance will show that she isn't but, my God, this is a rsique drawing for CRACKED! I love it so much! Is this a LATE NIGHT CRACKED issue and I missed something? If I was 9 and I read this, well, I would have learned something new about my body, if you know what I mean.

WHEN TV GOES COMPLETELY SCI FI: More Whitehead Art! On the Cover of "TV Guise", we get a drawing of the cast for "Little House on the Asteroid". This is followed by two pages of TV listings. "Happier Dazes" "With tonight's episode the nostalgic comedy is updated to the 1900's, where they still play 1950's music. In this episode, a space ship.." etc etc. This would be the best ever except for "the 1900's" It's updated from the 1950's to the 1900's? Huh? The rest of the article grinds on with parodies of every single show that's popular at that moment. It's all sci-fi'd up! And, it's lengthy!

ROCK AND ROLL YOUR EYEBALLS OUT: 7 pages of an Assistant Clerk at a grocery store becoming a big rock 'n' roll star. A lot of "Tune of..." sort of things. You Light Up My Like, Stayin' Alive, Hound Dog and others are parodied. This is OK. I'm not feeling terribly thrilled about this one. I wish I could. It gives me Grease feelings and those are never good.

Total - More beautiful than the Mona Lisa. Thank you for cleansing me, O Sweet Shut-Ups!

BACK COVER: TRAINING THE DOG - We're going Whitehead crazy! A decent one-pager but nothing great. Isn't the back cover part of the sales pitch for this thing? Couldn't they have smacked out a better gag?

Maybe it's my stomach but this issue tailed off fast. An article or two was high quality but most of it was treading water. I never lose faith in CRACKED but sometimes they try my patience. I know. They'll follow that with "You should try mine." And, then I'd kick 'em right in the slats.

Next Issue: It's no fun bein' an Evil Alien.
Posted by Turbot's Finest at 3:03 PM