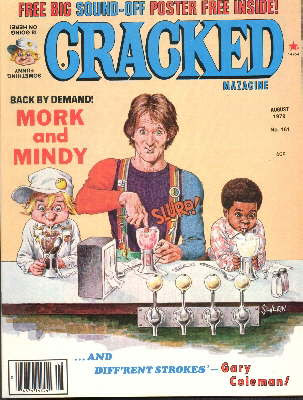 Great cover. The two big TV stars of the Summer of 1979 spending some time together. Oh, I smile! Interesting background color, too.

The poster is big and yellow and revolves around leaving a space for complaints. There's a tiny white box on the bottom. Hey! You can't fit too many comments in there! Cracked, you whomped me again!

CONTENTS - D. Moted is this month's pruf rdder. Looks like a fun issue. Oh, and I found out why Sylvester bought two ice cream sodas for the hottest stars on TV...To cool them off! Get the hell out of my office!

LETTUCE FROM OUR READERS - There's the IQ King groping Nanny again. Boy, they love that image. (Boy, I love that image.) Next issue - June 5th. Best bit: A snooty man with a long mustache hovers over the "Friends of Cracked" names and says: "Hellooo, Professor C.W. Peppersnuce here for Cracked magazine. As you can see, my mustache surrounds the names of those persons who received Cracked at their homes." It's little bits like this that makes me wonder who the new writer was. Occasionally, we've been seeing little snippets of this. A joke that is just a bit more clever than the average Cracked joke. Others will appear.

THE FURTHER ADVENTURES OF MORK & MINDY - Odd one. Certainly fun to read. But, not a parody. As the cover says, "Back By Demand" means that they've written an M&M article that could almost be an episode of the show. The couple go to Los Angeles for a vacation. Mork gets on the wrong bus and ends up as an extra on "The Chic of Araby" and then speaks to "Awesome" in the end. Apart from constantly breaking down the Fourth Wall and referencing the show's conventions, this is a straightforward M&M story. Almost like some sort of fan fiction or (as I've mentioned before) a portable episode of M&M before VCRs entered every home. Mork and Mindy don't even have joke names. It's interesting and fun and if it's purpose is to give kids an episode to access at all times, then it worked. It is not really a parody of anything, however. Although Mork's yell of "Right arm! Gravy!", instead of "Right on! Groovy!", when he's trying to be cool, is excellent.

LAST WORDS BEFORE THE HANG UP - Nudists, Ku Klux Klan members, potential suicides, crazed (possibly Nazi) bikers and Superman combine into two pages of hilarity that could have been from an issue in the late 50's with new drawings to update it. For example: The Ku Klux Klan guy, with ear to phone, is listening to a very jivey black man talk about how much he loves his daughter. Suffice it to say, these are the "Last words before the hang up". And, maybe, the last words of that caller's life. Does this article match up to the same age group as the previous one? I loved it but I'm an idiot.

Oh, there's a third page with celebrities getting calls. Woody Allen, John Travolta, Farah Fawcett...things like that. I'll let you get the jokes yourselves. Mail them to me.

SUPER MS - A Magazine for Lady Superheroes. And, it's pretty darn entertaining. The cover features LADY DISCO! She changes costumes before, during and after every adventure! And, she's being attacked by John Travolta with a huge knife. Nice! The insides are advice columns, stories about Dynamic Doll putting some ladies on Mt. Rushmore, wearing a safe on your head to keep your balance, using a special Atomic perfume to attract super guys, throwing manhole covers and things like that. It's a good article.

AND YET ONCE AGAIN STILL MORE FROM THE CRACKED LENS - 4 pages of yuks and guffaws. This is the one with the guy in bed with the skeleton. The skeleton asks the guy if her 'beauty sleep' is doing any good. It also has the picture of the guy being thrown of the balcony. This one's a classic. They're printed it a 1000% times. Enjoy it for the first time here!

THE CRACKED WORLD OF TEENAGERS - Hey! Those rock shows are real loud! Hey! Teenage girls talk on the phone a lot and act weird around boys! Hey! That one kid called that other kid "CLONE-O!" Well, that last one is new. I like the large panel with the folks at the rock show. The way it's drawn I kept thinking they were in a college lecture hall. I like the one "teenager" with the Letterman sweater on who seems to be straight out of a 1930's college film. Way to keep up with the times, everyone!

I can't stop smiling when I think of "CLONE!" being used like Nerd. That's good stuff.

IF GARY COLEMAN PLAYED OTHER PARTS - Incredible Hulk. Superman. The Godfather. The Hero in a John Wayne Western. All good. Arnold talks about chitlins a lot. He turns into the Hulk and Mork makes an appearance. Really, if you loved Coleman, like I loved Coleman, this was manna. This is an article you need to see. It's that good.

PHOTOON - Decent one-page gag. I enjoy these. I wonder if they were ever collected together somewhere.

CRACKED INVESTIGATES I.F.O.'s (Identified Flying Objects) - People see things like a man flying a kite. People report upon being transported in a plane. People report about going to see Superman The Movie. It's pretty amusing but it's very text-heavy and the joke is good for two pages, tops. Four is a touch too long. And, it seems like it might be in the wrong magazine. But, this time it's not that it should be in MAD. Remember Bananas?

THEW NEW POLOGLOID(R) NO-STEP CAMERA - Very funny one-pager that seems to be from the same joke space as the man with the voluminous mustache from earlier.

The GREATEST TV SHOW EVER MADE - "Life in the Neilson Arms" Boo Boo Kitty has been stolen. And, Laverne & Shirley & Mork & the Fonz & Battlestar Galactica & The Odd Couple & Archie and Edith & Lou Grant & Fantasy Island and everyone makes an appearance as they try to rescue it. In the end, who is the kidnapper? Don Rickles! (Remember his charming comebacks? "Sit down, you son of a bitch!" And, "You're one ugly MF, son of a bitch!" So, so charming.) Why? Because, he has just been cancelled on C.P.O. Sharkey and two "Don Rickles Shows". He's bitter. ("Your wife's a whore, you Sh*tbasket! Sonofabitch!" God, he makes me laugh.)

CRACKED INTERVIEWS THE FASHION KING - Best joke: We see the King's latest model...she's a skeleton. Nice. Apart from that & Nanny's charms, this one's a bit on the bland side. In fact, these interviews are beginning to sort of drag down the end of these issues for me. Sort of like the last song on an album that goes on way too long or tries to experiment and becomes a bit tiresome. Does Nanny retire? Sorry Nanny.

BACK COVER - Great Moments in Transportation. Ralph Waldo Tarzinksi. Why is Tarzan Polish here? Does that mean something? There's a vine and Tarzan has some other folks attached going to work. It's OK. I can't imagine looking at it in the store and saying "I'll buy that!" but, now that I have, it's OK.

A good issue. Solid CRACKED is always good for the soul. This issue has a lot of charm and some solid laughs. Well done, fellas.

Next issue: A diff'rent cover artist. (You see what I did there?)
Posted by Turbot's Finest at 9:18 AM