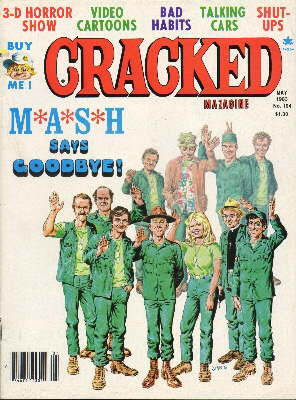 Remember last time when I mentioned the end of an era. Well, here is the Actual, Real End. M*A*S*H, after 11 seasons, ends. And, CRACKED says Goodbye to it...For once, the plain white background works perfectly. It's simple and not ostentatious. It's so nice to see our old friends in the background there. I wish they had made it kind of bigger. Maybe gotten rid of the stuff on top and moved the name of the Mazagine up a notch. But, it works.

POSTER: Pee yellow and red! I feel a little ill. "DO NOT READ THIS POSTER" and lots of fine print about being in trouble if you've read this far. It's too bad these gags have to intrude immediately upon the solemn charm of the cover. Oh well. Don't you dare tear this cover off! But, if you do, hang up the front cover rather than the poster.

TABLE OF CONTENTS: "Someone once said 'All good things must come to an end.' Well, apparently the television network executives believed that person. They have decided to cancel one of the finest shows in television history. Goodbye M*A*S*H! We'll miss you!" Wow...heartfelt sentiment from CRACKED. Do they have new staff there for 1983? Noah Candoo is the prrrff reedeer.

LETTUCE FROM OUR READERS: One person mentions five different CRACKEDs at once "...the March Knight Rider issue, Monsters - Collectors' Edition, a Super CRACKED, Giant CRACKED and an Extra Special CRACKED." Wow. I may review another CRACKED Monster thing for Halloween. Next issue - March 8, 1983. 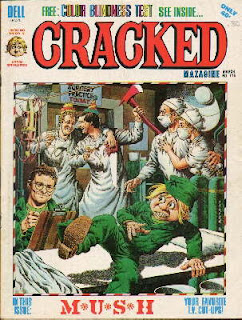 FAREWELL M*A*S*H*E*D - A CRACKED REMEMBRANCE: And so it goes. Hey look! It's the first issue they were on the cover of...#115 from March 1974...sigh. We'll get to that one eventually. Maybe I'll do a "Special Flashback" review to that one.

Anyway... And, the war is over and everyone is heading home. There are flashbacks to bits that we hadn't actually seen in the magazine but they we always imagined happening (IE a Hot Lips shower scene to end all shower scenes). Everyone has their final puns. Hawkeye always kept two writers stashed in his footlocker. The old cast makes brief appearances...And, in the end, everyone realizes that what they'll miss the most is all the great perks of the job and that awesome weekly paycheck. Hey! That's comedy. Goodbye M*A*S*H. We shall miss you. And, we will definitely miss you in the pages of CRACKED. CRACKED without M*U*SH (my favorite) doesn't bear thinking.

ABSOLUTELY, UNQUESTIONABLY, POSITIVELY, UNDENIABLY, THE VERY, VERY, LAST OF THE CRACKED LENS (and we really, really mean it this time, for sure!) PART XIX: Good choice. perfect placement of this article. It's only three pages but The CRACKED Lens shall never die! If the closing M*A*S*H bit had been followed by a lame filler article, I would have been pissed. This is a nice easer into the rest of the magazine.

HOW COME?: Yeah. This is the bit that I'm glad they didn't put after the opening bit of awesome. "How come you're too old to play with your brother's Hot Wheels but too young to drive your dad's car?" "How come a bag of potato chips is impossible to open, and even more impossible to close back up?" "How come if you're supposed to be so smart, you're reading this magazine?" Yeah, you tell me...At two pages, it farts by and the smell isn't too offensive.

TALKING CARS: Knight Rider Follow Up #1! A garbage truck says "Just what I need...another yummy morsel!" A car says to a guy making out with a gal "Oh, brother! What a cornball line! No wonder you have so much trouble making out with the chicks!" Apparently, GM and Ford announced that some cars would have voice computers. If so and if this article is them, they were sassy fellows. Flip to pages 3 & 4 of this bit and it expands nicely...Ads for Talking Cars and talking car movies and the new comic strips "Carfield". I like this article.

THE CRACKED WORLD OF BAD HABITS: Is filler material like this a bad habit of CRACKED MAZAGINE? Four pages of this? All these gags are recycled from the Magical Land of MAD. But, as I've said before, when I was 10 and I would buy this magazine...every article was pored over and read again and again. The art is certainly entertaining but the jokes, really, aren't. Didn't matter. I would read through the magazine fast the first time and then let it marinate in my mind...Ahhh...good stuff.

AN OWNER AND A PLAYER NEGOTIATING A CONTRACT...1982: Those darn Sports Strikes! The bit is OK but it's no big-ass bit of gaggery. I'm not a sports guy but I do like some sports jokes...This is all right.

You get the idea. "Worker" (ends with a robot), "Art Work", "Music" (they still hate rock and roll...cavemen bang on things and, today, "The Ozzy Ozbourne Band" look just like cavemen and bang on things), "Fighting", "Politicians", "Automobiles" (Knight Rider!), "Movie Idols" (Chaplin to ET), "Candy bars", "Athletes" and "Literature" (Hieroglyphics to CRACKED!)

A charming bit. Obvious but charming.

ROBOT REPORT: A robot article? Why? This is a magazine for robots. Ask Roberta Robot. T-Shirt Fads Hits Robot World. Join the U.S. Army Corps of Robots. Robots In The Spotlight. I'm not sure why the robot thing is here now. The article is OK but doesn't make me go wild. Sometimes I look at one of this articles and the layout seems to dare me to read on. That's what I feel with this one. "Why does it require four humans to screw in one light bulb?" "That's how many humans it takes to find one robot to do the job."

3-D HORROR SHOWS: The early 80's 3-D trend comes up and CRACKED links it all to horror films. And, I suppose, most of them were horror films. Odd that this is the first appearance of slasher-related stuff in CRACKED. It was such a huge part of early 80's Pop Culture. I would have thought it should have popped up sooner. The opening page is two crazy killers leaping out of the screen as they kill with cleavers and chainsaws. "This movie is a ripoff! In 'Halloween the 13th' they chopped up nine more people!" "Yawn! I haven't seen one eyeball come flying out of that screen in the last ten seconds!" "So far the biggest horror tonight has been these #@&$! 3-D glasses that won't fit over my regular glasses!" "That phony blood looks like the ketchup at Burger Queen!" "You're wrong! The ketchup at Burger Queen looks much more revolting!" That's the best part of the article...the crowd on the first page watching the slasher film. The remaining two pages are just 3-D gags applied to going to the Video Arcade and watching movies and going to the supermarket.

WHO IN THE WORLD DECIDED THAT...?" "...hailstones should only be measured in 'Ball-Size' units?" Just for that caption the article is worth a read. "Teeth have to 'Sparkle'?" "The length of everything on TV has to be in exact multiples of 30 minutes?" I like the art on this. The actual jokes are blah but it's fun to look at.

GREAT MOMENTS IN HISTORY: Stills with captions...captions filled with gags! Two pages and some funny moments. But, as I'm reading them, none of them really inspire me to describe them. So, maybe it's less memorable than I thought. Tough to say. Six panels, six captions and a couple smiles. I see Ernest Borgnine and I see a lady sliding across the floor. I see fun? Maybe.

WHAT TODAY'S STRIPS WOULD LOOK LIKE IF THEY WERE DRAWN BY RONALD REAGAN: Dennis The Menace, Dick Tracy, Mary Worth, Hagar The Horrible, Garfield, Little Orphan Annie, Beetle Bailey, Peanuts, Momma, Blondie. First, I had no idea "Momma" was around back then. Second, "Little Orphan Annie" ended in 1968. Third, Garfield now loves jelly beans instead of lasagna. Hey! Some of this strips are actually funnier than the things they're based on. When was the last time Blondie or Beetle Bailey was funny? Well, some political stuff in CRACKED. Interesting angle on it. Dennis the Menace adds 2 + 1 and gets 5. "Haven't you ever heard of Supply Side Mathematics?" Hagar refuses to attack royalty or noblemen so he goes after a Union headquarters. Charlie Brown wants peace so he makes one giant snowball as a deterrent. Ronnie and his comics. I like this.

I love shutting up.

Well, this issue opens hard and then trails off. The filler is inoffensive. The articles are, generally, fun. But, I really can't help thinking that I don't know where CRACKED will go from here. Where can they go? I guess a full-on Pop Culture reboot is in order.

Next issue: Ahh...should have guessed it!
Posted by Turbot's Finest at 10:48 AM