Cracked #164: Sylvester was the janitor on the Nostromo? 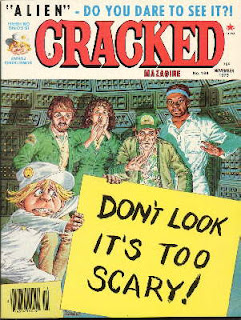 The cover is a fun one. Nice to see some variation on their regular themes of featuring the most popular person on TV at that moment. I haven't seen Alien in a while...maybe it's time.

POSTER: THE WAY TO CONSERVE ENERGY -- A switch with "Off" on both sides. Here's a surprise: There's no pee-yellow background to this one. It's black & white. Nice.

LETTUCE FROM OUR READERS: People ike the magazine. One guy likes How To Improve Your Memory but can't remember why. Ain't that great? Next Issue on sale September 25th.

ALLIEN AND HOW TO WATCH IT: This one is a heavily censored version of Alien. A man (Bob Sproul?) says that he hates all the gore in modern day movies and is here to censor them. (He mentions Prophecy, Phantasm and Nightwings [sic]. Probably one of the few times those three would pop up in the same breath.) The censor does not like gore and he's consistently throwing up black panels to block out the sloppy stuff. At one point, we go out and buy some popcorn to miss some splatter. I know a lot of kids like the gore so I'm not 100% sure who this is for. It seems like a joke but this censor really doesn't like this stuff. Possibly they should have used Nightwing or Prophecy...films that kind of stink, rather than a very good one.

However, the variation on the usual parody opening is a nice touch. Although, I find the attitude to be a little too Puritan for my tastes. It's worth a read. Imagine how they're going to feel in May 1980 when we all go to Crystal Lake for the first time.

WHEN GAMBLING BECOMES LEGAL IN EVERYDAY LIFE: Three pages of stuff like a man dropping a coin in a meter and getting {RING-A-DING} "Free Parking!" Bits like that. This is one of those articles where all I have to do is say "Supermarkets", "Voting Booths", "In A Hospital", "I.R.S. Form" and At The Laundromat" and you can guess the exact jokes here. Well, in pure CRACKED style, an interesting, different kind of article is followed immediately by something Mad first did in 1955. Oh well.

THE CRACKED WORLD OF AMBITION: Wow! These jokes are older than in the last article. Two kids are arguing about whose dad is going to make it to the top. One says "My dad made it to the top already!" He's a roofer. This is less of a funny article than a "Spot what the day-old joke is going to be before it gets there" bit. I don't like it. At 4 pages, I'm aching...downstairs.

CRACKED TIPS FOR ECONOMIZING: Fun drawings and slightly better gags make this one a fun dawdle. "The Economy Drive-In Movie Date" Put your TV in the window and sit in your car outside."The Economy Winter Skiing Vacation" You ski off of your snowy roof. "The Economy Prison" (I like this one...) We see the corner of a prison. The warden is talking to a guard about "...the latest gimmick for cutting down on prison costs!" An EXIT door. Nice. Not a stellar bit but worth your time.

THE CRACKED WORLD OF MARRIAGE: Good God, did Henny Youngman write this issue? 4 pages of...oh, I don't know. Part of me wants to write down all the jokes so a collective groan can coruscate across the internet. But, another part of me is sleepy. It's a hot day. A Marriage Counsellor is talking to a couple: "You have to assert yourself, Mr. Collins...don't always do what your wife says. In a happy marriage..." Phone Rings. The Counsellor picks it up. "Yes, dear...or course, dear...you're right as always, honey..." There are a lot of "fat wife" jokes and then there is a very odd one at a buffet line in a restaurant...

It gets its own paragraph.

There is a large man with a cigar walking with a woman who is all beat up with an arm in a sling. Another man leans in, pointing at a very fat woman, and says "Pssst. I hear you're a wife beater. How much do you charge?"

Thank you, CRACKED. All class.

THE LAST OF THE CRACKED LENS: One of my favorite CRACKED Lens's. 6 pages of some of their funniest bits. There is a Collectors Edition of The Cracked Lens out. Go on Ebay and find it. My attempts at describing the gags will be a waste of everyone's time. But, I'm looking and I'm laughing.

YOU'RE GOING A LITTLE TOO FAR WHEN: You have three articles like this in the same issue! C'mon! "You win a weekend trip to a luxury resort, but squawk because the TV set in your hotel room is only black and white!" "You ask your girlfriend to brush off all those long blond hairs from your jacket...and she's a brunette!" "You rob a bank and then ask the teller to give you a free calendar!" It's just two pages and if you flip, real quick, you'll get to the next bit.

LITERAL INTERPRETATIONS OF BASEBALL EXPRESSIONS: Remember that bit, a long time ago, where they did literal interpretations of headlines. This one is like that. Two quick pages with funny illustrations with bits about "foul balls" and a player being "behind the bag" and one player "walking" another. It's fun. A little bit of life to it.

THE CRACKED WORLD OF DISCO: Thank God, disco has officially and mightily arrived. Unfortunately, this bit ooks just like the marriage bit and the ambition bit so I, frankly, could give a fat crap on Warm Thursday. Disco music is better than people say but some of it certainly does stink. Put on some Bee Gees and carry on.

TEN LITTLE DRIVERS: A poem about the OPEC nations squeezing money out of us for oil. 1989: "One little driver.../ His car he cannot run./ At ten bucks per, it will not stir,/ So then there'll be none." Mad? What are you doing here?

IF MORK APPEARED IN OTHER TV SHOWS AND MOVIES: Star Trek - Kirk turns invisbile. Mork plays Spock. Kirk becomes visible again but his knees don't. Why not. He has...knee-monia! "Spock, go sit on your ears!" King Kong - Mork uses his egg spaceship to bring down Kong. Gone With The Wind - He makes a joke about Scarlet Fever. Why wouldn't he? Sherlock Holmes - Mork is Holmes and the murderer! I enjoy these articles and this one is fun...Imagine my surprise however.

No Nanny! The heck! I always expect a parody and then Nanny. What that means is that the issue ends quicker than I imagined. But, to be honest, as nice as it is to give Nanny a break, all those endless Mad-like articles bore me to tears. The magazine seems to be tearing at itself. Bits (Allien, Mork, the Auntie Dinger ad) seem to be from a New CRACKED. But, all those other bits are straight from 1961. I don't know what happens next but I hope they break out of this soon.

Next Issue: Do you know anyone who saw this movie?
Posted by Turbot's Finest at 1:04 PM