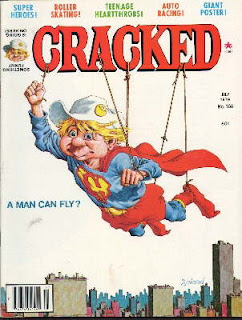 Have a look at that cover! Awesome drawing. The ropes holding Sylvester up are great. But...stop looking there. Look up top. "Super Heroes! Roller Skating! etc..." Now, this is MAD Town. I'm not a fan of this sort of thing. It mars the cover. Severin always does such a great job...Are those blurbs needed? No. Of course not. Sigh. But...let's forget that and hop in.

POSTER: If this spot turns blue, evacuate area immediately. (Can you see where the rest of this poster is going?) Hooray! Pee Yellow backgrounds are back!

TABLE OF CONTENTS: Seymour Errs - Here's our pruf rdder. Looks like a decent issue. I think. Let's step to the Lettuce...

LETTUCE FROM OUR READERS: "Your M*U*S*H was great!" (Can you guess the editor's response to that one?) Next issue - April 24th

SUPED-UPMAN - THE SATIRE: Seven pages! Almost as long as the movie. So...On the Planet Clipton, Klong and Whetola Gai Pan send their baby Moo Goo to Earth for some reason or other. They are plant people but the baby is Asian. But, he grows up to be a super Nerdlinger named Cluck Clone. He goes to the big city to work in a deli where his boss is an Indian named Running Water. (So, Cluck can call him "Chief".) A super villain named The Shoe hides all of the water in Smellville in a closet. Our hero saves the day and some of it is funny but some of it is just odd in the way that Star Wars II was odd back in #147. Sometimes the Cracked writers seems like they came from the planet Clipton.

CRACKED LOOKS AT RACING: Lots of "going really fast" gags. Lots of "really nice car" gags. Things like driving a mini-race car on the bumper car ride at a carnival. Whistling at a nice chassis. Things like that. I've never been a racing fan and this article hasn't changed my mind. Some great illustrations but a bit of a yawner.

A CRACKED EXPLANATION OF THE DIFFERENCES BETWEEN THE NEW FIRST CLASS, REGULAR AND ECONOMY AIRLINE FARES: It's just what it says. Three pages of pretty funny stuff. First Class - Champagne Regular - Soda: Bubbly or flat? ECONOMY - The Stewardess turns on a house and has everyone open their mouths. Restroom facilities? First Class and Regular share a bathroom but...The panel has a man standing outside the door with a stewardess holding a megaphone. She is asking the regular passenger to exit the lavatory as a First Class customer needs to go. "But, I'm not done, ma'am!" "I'm sorry sir! You know the rules!" And the economy? There's an outhouse...on the wing. This ones pretty good. The landing procedure for Economy is great. The stewardess just lifts the bench everyone is sitting on and dumps them out the door in-flight. Great stuff.

CRACKED GUIDE TO ROLLER SKATING: Hey! Racing and now Roller Skating? Get out of here! Oh, it's real. Well, this is OK. Better than the racing. Jokes about buying expensive skates and how to turn around on a roller rink. (Hold out your arm and when someone runs into you - spin.) There is a roller derby joke. There are old people skating. There is all this stuff and I used to love having roller skating parties in school so the nostalgia of this article is better than the article. Can't fault it there. Thanks, CRACKED.

THE CLASSIFIED ADS OF THE FUTURE: Aliens and robots! Psychotherapist for Demented Robots - "Must be able to deal with the following robot ailments - Oilcoholism/ Rustophobia/ Overloaded Brain Circuits/ and so forth" Do you know which mouth of a Jovian you stick the thermometer into? You better if you want to be a registered nurse! And, Klinker's Sells Used Rockets. Not bad. At three pages, it's a breeze.

PHOTOON: Not the best of these one-pager photo gags but not bad.

IN CASE OF EMERGENCY: Break Glass! At a barber shop, we have a toupee. At the health food store, we've got junk food. In the Cracked Editorial Office, we've got a book of old jokes. Stuff like that. At two pages, this is a quick scan and a smile.

THE LAYMAN'S GUIDE TO HOT AND COLD WEATHER: Hot on one side. Cold on the other...just like a McDLT. I love the art on this one but the jokes are so old..except the Abominable Snowman doubling as Santa because it's so cold. I feel like I've seen the "Cold" version of this in one issue and the "Hot" in another. Another quick read. This one is drawn with love but joked with less aplomb.

CRACKED PRESENTS SUPERHEROS OF THE FUTURE: Love it! Sideways...tilt! Fun. Five new goofy superheroes for folks to enjoy. They are:

1) Souperman - He's a guy whose body is a can of soup. He fights a giant can opener!

2) The Miraculous Mosquito Man - He looks a lot like Spider-Man except he's a mosquito fighting a giant can of RAID!

4) SUBMARINE MAN! - He's a man with the body of a sandwich! Two Italian peppers dance and sing "I'm a Pepper! You're a Pepper!"

5) THE BULK - Something about burping.

ONE AFTERNOON AT A STOP LIGHT - Not a bad one-pager but they've done better.

LYIN' BEAT: All your teen heatrthrobs and some Osmonds load this one up. It's loaded with gags and photos and lies and has a great fourth page...Peter Criss-related? You bet your ass!...This article's fine but it feels a bit too thick and a bit too predictable. The jokes don't really grab me. They've done things like this before (but I don't remember when) and it's been done better. Let's keep on movin' on...

CRACKED INTERVIEWS THE I.Q. KING: It's a real smart, snotty kid. Nanny brings her nephew Dickie and he's real stupid. Jokes about how the kid was really smart from the day he was born mix with Dickie's awful puns and Nanny doesn't really do much of anything. I'm not sure why they brought her along. Oh, the kid gropes her on the final page. That must be it.

BACK COVER: Great Moments in Sports - A convict pole vaults over the prison walls. Is this comedy?

Not a bad issue. The hit and miss ratio is pretty solid. A fun read for a cold evening with a mug of cocoa. Oh, extra points for using "Clone!" as an insult, like "Nerd!". Merry Christmas everyone! CRACKED loves you!

Next issue: I don't remember. Something funny, no doubt.
Posted by Turbot's Finest at 9:14 AM