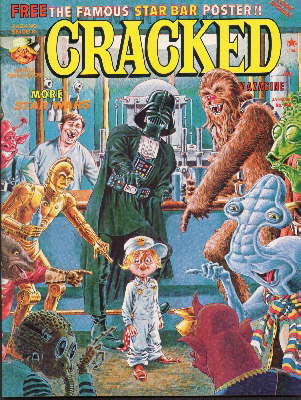 Great cover. The center of the "Star Bar" poster. And, yes, this month's poster is the pretty awesome "Star Bar" spread. One of Mr. Severin's best. Everybody's laughing at Sylvester! Because he's the freakiest one of all.

As we've seen in the past, though, a kick-arse cover can disguise pretty bland insides. What about this month? let's jump in.

LETTUCE FROM OUR READERS: The lettuce sometimes looks more like cabbage to me. Next issue - December 20th. Amos Svoboda has a couple of letters here. But, it's only one page. There's a subscription ad on the second page. Oh well. I just set myself up for another year. Pretty cheap. $4 for 9 issues. Not bad. That's cheap comedy.

THE SPY WHO SNUBBED ME: Lots of funny visuals. Lots of Jawz attacking Jaimes Bund. And, possibly not their best use of "funny character names" Bund and Jawz? Who wrote this? My 4-year-old nephew? The best gag in this one is during the opening ski scene where a head is randomly floating through the sky saying "Uh-oh! Wrong page!" Who is he? We'll find out. Not a bad opener. It moves briskly and James Bond films are generally one step away from parody anyway so they didn't have to travel far. When Bund turns to the audiences and says "Aren't my asides nauseating?", that's nice.

THE MACHINE MANIA MONOPOLIZES THE MOVIES: Basically fake movie posters for films that are completely robot or machine filled. A bit of a strange article, I thought. People were certainly robot nutty because of Star Warz (Wars, sorry) but were they really "machine crazy"? Maybe they were. "Robot Love" is a robot love story starring Jason Robots Jr. and Joan Rivets. "Robbie the Robot Cop" has a sidekick dog played by Rin Tin Tin. "Riding For a Fall" is about the tragic end of Hollywood's #1 stunt car. This one stars Jane Fender. Bela Lugassy stars in "Dracula Drags Again". And, of course "Gunfight at the OK Garage". But then, it takes a strange turn. "Introducing Morrie the Mower in...The Grass is Greener". "The Iceman Cometh Not" is starring Fred "the Fridge". "When Your Number is Up" is something to do with a calculator. There's a real charming in these articles that seem to catch a clever idea from pop culture and then spin off into realms that make you think "Do they know what they're writing about?"

A SOUVENIR PHOTO ALBUM OF THEIR TRIP TO EARTH: Star Warz, ahoy! Cy-Threepiu & Artie-Ditto visit Earth and what do they find? What you'd expect? Yes. Artie is treated like a fire hydrant. They get good service at the gas station. They get mad when they see a guy punching a vending machine. They are thrilled to watch people at the beach swimming in oil. It's fun to read but it consists of 100% of the jokes you would have thought up if this were your job.

A BROCHURE FROM P.T.U.: Prime Time University! It's all about congregating and watching TV and reading TV Guide. This is a pretty great article. But, unfortunately, you'd need to read it. Lots of fine visuals and great "brochure" text. It even has a commercial break. Let me just say: Kojak graduated from here with a LLB (Bachelor of Lollipop Licking). This is good stuff, folks. Find it and read it.

THE HOW TO INSULT MANUAL: I can take or leave this one. It's basically a guy telling another guy all the insults he can use in his day to day life. I was going to pick one and print it here but, Lord, they're all bad. "I remember you when you were only this big!" "And, I remember you when you were only this wide!" Stuff like that. One great joke: The guy telling the insults is the head floating through The Spy Who Snubbed Me. His head appears at the top of certain panels narrating the insult action. Somehow he wound up in the wrong article. Take that and move on.

A CRACKED LOOK AT A PLANT STORE: Big drawings, fewer word balloons than usual. Not actually a funny setting but there are a lot of women who look like Nanny Dickering. I've been enjoying these more and more lately so...this one ain't bad. But, a plant store? What's next? A stationary shop?

ONE MINUTE TV SHOWS OF THE FUTURE: Very fast TV. 60 Minutes is now 60...you guessed it. Interviews are people saying "Hello" and that's all. Gone With The Wind is edited down to a minute. Funny how this was such a crazy thing then but, gradually, this is the way most TV has become now. And, it didn't require the choppy "Comedy" we get here. It slowly became this over a long period of time and tightening. So, the article is slightly amusing but not really up to much. Time has dulled its sheen. It does have some charm, though.

THE CRACKED WORLD OF TOYS AND GAMES: I'll just start with this: There are two cheerleaders in this one holding up their phone numbers for the football players. Their numbers are - Suzy: 213-1876 & Lucy: 943-7890. They're older now but they've still got zazz! MAD invades CRACKED offices. A series of comic strips with gags a-plenty! Franny Fallapart from Renco is the highlight. She's a doll that falls apart. A brief read. Good for a smile. But, let's move on.

THE 99,999 MILE BOOK: A parody of a car care booklet put out by Shell that ties everything back to Shell products. It's laid out sideways as if it were a real car care book and it's pretty amusing. Actually, they are Shill products but you know... Always use Shill oil. Sage bit of advice: Every year you should do a simple check-up on your car. "Engine...Is it still under the hood?" Useless info except when it's sending you to Shill products. Fun stuff.

CRACKED INTERVIEWS THE HOBO KING: Nanny! This one is pretty good. I know I've been getting down on Nanny lately but this one has verve. A good issue can perk things up. Turns out this hobo king lives in a mansion. There's money to be made in hoboing! Ahh, what happened to hobos? They do rip off a Groucho Marx joke at one point (probably more than that, actually). The Hobo King makes a joke and then, in the next panel, he's looking at us and saying, "Well, look folks. Every panel can't be a gem!" Only remind us of that when we're in hysterics otherwise it looks like you really don't care.

STAR PEOPLE WEEKLY & CREATURES & THINGS: A tabloid for outer space! Hugh Hefner XII is on the cover with his outer-space Playboy Empire. And, the gals look real odd! Apparently, they just opened the first McDonalds on Uranus. How do the new Polaroids work? Pop the Polaroid Pill in your mouth. Focus on the subject. Tweak your nose. Finished photo pops out of your mouth. It's fun. This is an entertaining article that pops up in one of the SPECIALS in the next year or two. Look for it! Oddly enough, at five pages, this one could have been longer.

An extremely charming issue. This is the way CRACKED does it right! A dud here and there but, overall, solid. Makes you smile and makes you want to read more.

Next: More Star Warz! More Fun? We'll find out.
Posted by Turbot's Finest at 8:55 AM