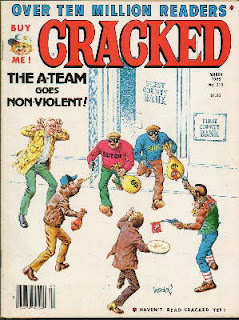 I never noticed the shoddy background until right now. Didn't matter to the Kid In Me. The A-Team going non-violent was an awesome idea. I hope Butch & Slug didn't shoot the guys! Oh, and where'd the lady, that I couldn't remember being part of the team, go?

POSTER: I wanted to hang this one on my wall. But, I didn't because it would have ruined the issue. I wish folks who bought this issue 26 years ago had not hung the poster on their wall because, when they go to sell this issue on Ebay, the resell value dips into the toilet...hard. "This Poster Is Out Of Order - It read own your at risk" Yes, I know, CRACKED, I know.

TABLE OF CONTENTS: Same pruuph raedre. They got rid of Elaine O. but kept the same PR. Fine with me. He does good work.

LETTUCE FROM OUR READERS: No "next issue" box. But, there is a "Statement Of Ownership etc." And, the readership is half of what it was in the second half of the 70's. Most of those were such great issues. I wish I hadn't been a baby or a small child then because I could have read and enjoyed those heartily.

IF THE A-A-AYY TEAM WAS MADE LESS VIOLENT: It would sure be wacktastic! A little boy's hamster was kidnapped and the team goes into action! Mr. T tickles a man. They point their fingers and go "Bang. Bang. Bang." They torture a man by making him watch D.C. Cab and then...MR. T makes a man faint by showing him a picture of Boy George in a bikini. (No one man informed Pierre's sexuality more.) Fingernails scraped on a chalkboard save the day!

But, their ratings are terrible! It got beat by Lassie and then went off the air in 1973! Violence is Back! Thank Christ!

A funny opening bit and I do remember thinking that this boded well for a killer issue.

ABSOLUTELY, UNQUESTIONABLY, POSITIVELY, UNDENIABLY, THE VERY, VERY, LAST OF THE CRACKED LENS (and we really, really mean it this time, for sure!) Part XXIX: They really love those commas. 3 great pages. Hey! Shelly Duvall! Some guys scaling a building. I laugh and learn with Lyla.

DON'T YOU HATE ON YOUR BIRTHDAY: Oh well. They can't all be killers. You know (and I'm speaking to you Rob!) that I'm not a big fan of this sort of article. Occasionally they're cool but much of the time they just feel tired...no one has to work too hard to get it done or maybe they do and I'm wrong. Regardless, I'm not a huge fan but this one actually isn't bad.

...when your mother bakes a carrot cake instead of a chocolate cake? (I've always enjoyed carrot cake. In the picture here, a mom has a cake with carrots sticking out of the top. Not sure what that might be or if, possibly, this kid's mom is crazy.)

...when your sister gives you a present you cant use...so she gets to keep it herself? (This nerd got a Cabbage Patch Kid! What a clone!)

...when everyone gives you practical gifts instead of fun stuff? (Amen!)

...when your horoscope is stupid? ("For Those Born Today: Anyone born today is destined to be average. Creative pursuits are pointless, as you have no talents. As you strive for success you'll find many stumbling blocks, don't let them trouble you, just give up, it's useless...you're a waste.)

CAREER GUIDE FOR OBNOXIOUS KIDS: Wow. Another one of these. Left side: "Does He/She..." Right side: "Future Career:" Well, it's not quite the same set-up but it's in the same spirit. "Tell fibs?" "A Politician!" "Play 'hooky'?" "Civil Service Employee!" "Throw tantrums?" "A famous entertainer!" In that one we see a kid on the floor yelling "Wahh!" Then, we see a "rock star" with a microphone yelling "Wahh" (My copy cuts off any exclamation point.) CRACKED, still going after rock and roll, huh? Oh well.

FRONTIER DUDE: Killer article! Fake magazine for "...sophisticated buckaroos who cotton to the finer things in life." There is a picture of several very severe looking Native American Women. "More Captivating Squaw Pin-Ups Inside!" This bit is five pages and whoever wrote it should have done more for this issue. It feels like effort was put into this. It's a set of old West cliches spun round into some comedy. Well done! "Side Kick" deodorant for gunslingers. There is a column by Ma Perkins called "Advice To The Gay Dog". "What sort of Maverick reads Frontier Dude?" I like this bit. If I could, I'd reproduce it for you but then I'd be arrested for reproducing copy written material on the Internet. It's Christmas...Why do you want me to go down that road?

WORD PLAY: Awesome. I love "Spiral Staircase" and I figured out that one! Two pages of smiles.

YOU KNOW YOU'RE A MTV FREAK WHEN...: Wow. They've got everything I don't like in this issue. Is there going to be a "CRACKED looks at..." later on? Yes, you want MTV dinners. Yes, you trade in a boombox for a portable TV. Yes, you count rock stars instead of sheep. Yes, CRACKED discovered MTV...move on.

RANDOLPH THE REINDEER: I will be transcribing this beautiful Yuletide Poem in a future post. Stay tuned.

YOU KNOW YOU'VE GOT BIG PROBLEMS WHEN...: Did they have a file full of these marked "Unused"? It was the end of the year. Seems like they have half of an actual issue and half an issue of CRACKED GENERICA. "The plumber arrives, looks at your leaking pipe and says...'Uh oh. I'd better call my office and clear my calendar for the rest of the week.'" "On your honeymoon, it's just..." I can't do it. Sorry. It's two pages and then it ends.

TRANSLATING TECHNICAL TALK: Seriously, guys...What the hell? Left Side: When They Say. Right Side: They Mean. Sigh. POLITICIANS - "When They Say - Because our consumer index is out of line with our gross national product, we must amplify our personal revenue commitment." "They Mean - Taxes are going up again!" WEATHER PERSONS - "When They Say - The forecast calls for cold air mass tendencies with an accessible high pressure zone leading a warm front with a 50% chance of precipitation throughout the interum.[sic]" "They Mean - Your guess is as good as mine."

THE CRACKED MONEY DIET - 22 WAYS TO SAVE OVER $600 (MAYBE): I like the art on this one. I like the bit about sending one family member to a movie and then having them tell the others about it. I like placing a mostly-empty toothpaste tube under the tires of a car and having Mom back up to get the last of the paste out. I love the "Recycles Old Greeting cards" bit. I used to do that. "John, Happy Birthday - Aunt Martha" becomes "John, and I wish you a Happy Birthday Aunt Martha." Fun article.

SAGE BRUSH: What is he up to now? Hey! It's Abundant Bill! A decent one-pager.

THE CRACKED TV WATCHERS GUIDE TO SMALL SCREEN ETIQUETTE: "The Indispensable Manual for Proper Behavior Near and Around a TV Set when Either Alone or With Others." "The phone rings during part 3 of a 3-part mini-series. What is the correct procedure to follow?" Give the phone to the dog! "So Bobby, how was your science exam?" "Ruff." "Yeah, mine was rough too." Eat like slobs during commercials but sit and watch when the show is on. There's a lot of text in this bit but there are some funny moments. How to sit while watching the Major Networks compared to PBS? Check. There is a kid watching the "Mr. T Comedy Special". That's cool.

SELL IT BACK: One-pager with a good punchline. Frontier related...hmmm, interesting theme for this issue.

THINGS THAT ANNOY US THE MOST: Do I need to make the obvious joke here? And this is the big closing article...Oh, CRACKED..."Presidential news conferences that pre-empt only the good TV shows on TV." I remember Reagan pre-empting a lot of my favorites. "An itch that's impossible to reach." "CRACKED Magazine articles that are so good, that you can really relate to and are so entertaining, you never want them to end, but they do." And this one ends...

BACK COVER: Hudd & Dini...No, they didn't make it out of jail this time either.

And so, my Heavy Reading of CRACKED Era ends...More or less exactly as it began with an uneven issue doing some things I loved and some things that bored me silly. Well, they were still trying (I think). Now, we move to the end of the Sproul era. What did he get up to before he left?

NEXT ISSUE: A Melange!
Posted by Turbot's Finest at 2:15 PM