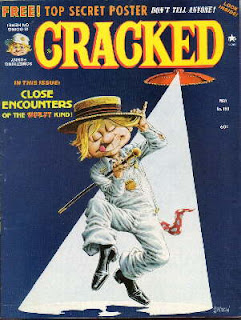 150 issues of CRACKED! Who would have thought that this little goofball magazine would make it this far? And still doing the same jokes! Ahh...Makes me smile. Without further ado, let's step inside this important issue and grope around.

COVER: Excellent. Good for a smile. I always like to Sylvester front and center.

POSTER: A "Top Secret" one that really isn't all that great. Possibly the problem with it is that if you have it hanging in your room, it's just too much to read and the joke is too subtle. Folks want to look and acknowledge and smile. This one is too much effort and not enough payoff.

TABLE OF CONTENTS: Luke N. Cee is the pruerrfer for this issue. A preview of upcoming articles? Two words: Jimmy Carter. How's that grab you?

LETTUCE FROM OUR READERS: One page. The second is that "Fighting Inflation" ad again.

CLOSE ENCOUNTERS OF THE WORST KIND: I haven't seen the film in years. Does someone want to send me a copy? I'm kidding, of course. A great parody. It has a real nice flow to it and there's always something fun going on. Some of the jokes are older than a Civil War veteran. (How many kids of 1978 were actually familiar with the song "Melancholy Baby"? I only knew it from CRACKED jokes.) It's a brisk 7-page opener that goes against my "no movie parody" rules. The closing joke is a McDonald's one! The head alien is asked the secret of the universe. His reply: "Two all-beef patties, special sauce, lettuce, cheese..."

THE CRACKED GUIDE TO PADDLEBALL: Why not? Paddleball! They even mention it in the intro..."Just when you thought you had learned every sport that there was to know..." Ahhh, something about this guide is charming. Silly pictures with, mainly, straight captions. I smiled throughout. Maybe I'm just feeling good. Maybe Jesus loves me still. I don't know. Regardless, this is fun CRACKED.

COWTOWN U.S.A.: The best! Cowtown (from Issue 139) has returned! It is a photo (real photo) filled brochure for a vacation in Cowtown. A lovely young lady and a man in a cow suit enjoy the town. This is very funny and almost feels more like a National Lampoon article than something for CRACKED. If I had the ability, I'd post the whole thing. But, I don't know how. Suffice it to say, you get a buttload (is that the right word?) of info detailing all the fun stuff to do in Cowtown. I will list just some of the activities on the final page:

"Get Up!
Get Out!
And
-Come wash in our sinks!
-Ride on our newly paved road!
-Smell our bread!
-Shiver in our cold!
-Soak in our rain!"

THE CRACKED WORLD OF HOSPITALS: First thing I noticed was that it's printed poorly. The article is too close to the top of the page. The very top edge of everything is cut off. Quality, thy name is CRACKED! The first thing I thought was "After Cowtown, this is right back to MAD-sville." But, it's actually not. If you read the article, it is not the standard several panel comic strip-style stuff with a bad punchline. The way this one is written is more interesting. Jokes and funny names are sprinkled throughout. Not just in the final panel. One guy is named "Mr. Pumplechunker". Were they all high over there? One of the strips starts with a fat lady swinging from a bar in a doorway. It ends with something that doesn't even seem to be a joke. The gag is at the start and it moves towards serious behavior. Wow! I wonder if this thread will grow and extend across the issues? Possibly not but... 4 pages of an interesting avenue.

A CRACKED LOOK AT A SKI LODGE: Funny jokes? You won't find them here. "What's that jacket of yours lined with?" "Duck down." You provide the punchline. However, this one is laid out exactly like the Santa's Workshop "LOOK" from the previous issue and it's fun to stare at. Nothing all that humorous but not a bad way to spend two pages.

IF THE CARTER FAMILY BECAME TV REGULARS: No. It's a lot funnier when Darth Vader is on a TV show. The Washington Squares with the Carter Family is mildly amusing. The Man From Atlanta (Man From Atlantis parody) makes me think that the original 5 episode miniseries of Dallas would have aired the month after this issue came out. So, in March 1978, Patrick Duffy (Or "The Duff") was known to CRACKED readers as "The Man From Atlantis"! (Steve?) But, at the end of April, he would be known as Bobby Ewing.

Actually, I wouldn't mind talking about Dallas but I'll keep on moving.

OTHER "SELF-SERVICE" BUSINESSES: Self-service gas stations lead to conjecture. Self-serve hospitals and supermarkets and courtrooms and hair salons and restaurants. Another strange article. The jokes aren't funny and the drawings are so cluttered and zany that, on occasion, I can't quite see the joke. (The supermarket is a good example. What am I looking at?) However, the energy and smash of the drawings make for an article that I just kept peering at. It was fun.

THE CRACKED GUIDE TO MARTIAL ARTS: Lots of funny drawings of people kicking and punching things. I've always thought that two "CRACKED GUIDES" in one issue was too much. This is no exception. But, it is fun. The two men dancing in one diagram is funny stuff. Like a lot of this issue, this article is a breeze. Smile and enjoy.

GOOD TYMES: "Good Tymes"? How long did it take them to figure that one out? "Just throw a Y in there?" "Where?...Oh!...Good stuff!...Lunch?" This one's all right. The earlier Good Times parody back in Issue 130 was funnier. By this point, Florida was off the show. The father was long dead and all sorts of secondary characters had taken over. Mr. J.J. Walker is as good as ever but this makes me kind of sad. Shows that grind on long after they should have stopped are not so fun. It's like seeing the end of My Three Sons. Everyone's married and has kids! 12 seasons that thing was on for. Somehow I just end up wistful rather than cheerful at the end of this one.

CRACKED INTERVIEWS THE SOUVENIR KING: It's Nanny - looking good. It's some guy selling souvenirs - he's a shyster. Nothing worse and nothing better than they'd done before with Nanny. To be honest, I was really hoping they'd end the issue differently. Nanny at the end is honestly wearing on me. Oh well...so be it. It's like one of those albums where everything really rocks but the last song is longer and slower than everything else, kind of dragging it down. Let's move on...I don't expect a change here.

Every person shut-upped and named in this issue. Great stuff.

BACK COVER: A jockey shoots another jockey to win a horse race. The issue kind of tails off. (No pun intended. Pun received?)

I loved this issue up until the end. But, there is enough good stuff and slightly odd off-kilter stuff to keep the CRACKED fan amused. This one actually might be a decent one to show non-fans. I think I'll show your mother.