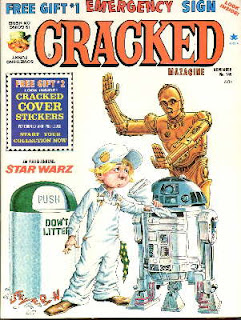 Well, you knew it was coming. Star Wars is here! And, it will almost be as big as The Fonz. Expect heavy Star Wars presence over the next batch of issues. Good or bad? Let's see. There are free gifts inside so that's something.

THE POSTER: "IN CASE OF EMERGENCY, LIFT FLAP!" And, if you lift the flap it tells you to knock it off. Only lift it if there's an emergency. I don't know if I have time for this kind of chicanery.

LETTUCE FROM OUR READERS: Two pages of magic. "Next issue - September 27th"

STAR-WARZ: Excellent parody. Well, pretty fine parody. Again, the movie parodies don't always grab at me as strong as I'd like but this one is pretty nice. This feels a lot like every joke-filled parody that kids made after the movie came out and it's no worse for that. I'm tempted to detail everything in this one but I think that would be silliness. This is good stuff. You should seek this article out and give it a read. (It's probably in a CRACKED SPECIAL somewhere.)

THE CRACKED GUIDE TO CANOEING: I've been canoeing a lot and this guide would have definitely come in handy. This article is of the "Straightforward captions with wacky pictures" variety. It's all right. Somehow it feels very odd coming after Star-Warz. Almost like the magazine is trying to bring itself back down to earth. The previous article went all over the place. This one is blocky and text-heavy. It's a bit of a sharp yank.

ON CAPITOL HILL: A clever little one-page zing. An interview with a politician that caps off with a nice punchline.

WHEN THE COUNTRY RUNS OUT OF WATER: All sorts of little gags about what will happen when we run out of water. Crooks stealing water coolers. Ice cubes being more important than diamonds. Things like that. Some funny illustrations here. The best bit? "Conserve Water-Drink Booze!' I'll get behind that.

THE CRACKED GUIDE TO JOGGING: Another guide already? And, this one is of the same variety. And, it looks really familiar. I don't think it's a repeat but maybe they should have kept this for the next issue. If there had been only one of these Guides in this issue, Awesome. Two is a bit much. Some fun captions and pictures but I wandered away halfway through.

What an odd issue so far. They started off with a bang and they're doing their best to back away from it. Why?

FRUSTRATIONLAND: Fantastic! Instead of "A Cracked Look at...", we have this. An amusement park full of annoyances that people can knock around. Burn IRS Forms. Take a tank trip down the highway. Abuse a Farrah Fawcett-Majors lookalike. Pretty funny and kind of sad at the same time. You can't really eliminate your problems but you can go to an amusement park and pretend like you can for a while. Well...

There are also little CRACKED COVER STICKERS in the center. Various issues of the magazine from the 50's and 60's. It's pretty sweet. Strangely, several of them resemble MAD covers.

FRINGE BENEFITS ATHLETES WILL SOON BE DEMANDING: Their own personalized cheerleading squad. Brow-wipers for tense bowlers. Padded basketball hoop rims. Things like that. It's OK but I didn't find myself nut-cracking over this one.

CRIMEDOM'S MAIL ORDER CATALOGUE: Things for crooks like mugging tips and mouthwash for whoever gives you the kiss of death. In fact, the mouthwash joke was just used in the Fringe Benefits article. This one's all right but I have a tough time getting too jazzed up about it. This issue is losing me.

THE GREAT AIRLINE WAR: Fonz flies TWA-AAAY! Best joke here. Lots of gags about the crazy stuff airlines are doing to get folks to ride. Concerts, tennis games and all kinds of junk. This one is made up of a series of small ads detailing the fun on each plane. It's pretty good but, you know the rule, invoke Fonzie and you've limited yourself. The best bit is the bit with Fonzie.

THE DEEEP: Another movie parody. I can't vouch for the movie (as I've never seen it) but this parody isn't bad. It has a nice flow to it and a few funny moments. It's far less MAD-like than the Star Wars parody. It's nice to see two different sorts of parody pop up. Both of them are fun although I really would have preferred something less limiting here.

CRACKED INTERVIEWS THE INSURANCE KING: I love Nanny more than ever. However, these articles are tiring me out. I'm starting to dread reaching the end of these magazines as the repetitive nature of these things makes me sigh. Maybe Nanny should have her own show or something, like a sitcom? I don't know. Not a favorite part of the magazine for me.

Total: You make the calculations. My Shut-Ups calculator is broken.

The Man and the Ink Spot (back cover): Nice closing one-pager. A lot more fun than many of those "History/ Inventions" things that normally float around back here.

Boy, I ran out of steam here, huh? The issue was mighty uneven. Some great bits mixed with some stuff that barely kept me awake. I think it's one of those things where Star Wars seems to welcome the magazine into a brave new world but most of the issue is the same-old CRACKED. And, frankly, I'm hoping for a new revolution in comedy here. The Fonz knocked us up a level. I was hoping Star Wars would have the same effect. Oh well.

Next Issue: A throwback cover and some sassy insides!
Posted by Turbot's Finest at 12:00 PM