CRACKED #125: Sylvester is as large as those buildings! 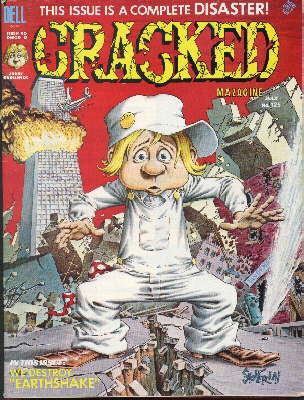 Great cover. For once, the strange background works perfectly. The red sky seems to be strange smoke. One of my favorite Severin covers of all time! Are you glad that you know that?

POSTER: Pee yellow words on the black background..."THE WORLD WILL END TOMORROW" (and a joke). I won't ruin it for you. This is quite the disaster-filled issue and, frankly, I say that it's about time.

There are only three writers listed! And, one of them is Ben Slo...Maybe two writers?

LETTUCE FROM OUR READERS: Next issue - April 22nd Iron-On Feedback! Everyone loves the "If You're CRACKED, You're Happy" iron-on. I saw this letter..."Dear CRACKED, I wish you would do an interview on The Magician, starring Bill Bixby..." I just got a set of that on Taiwanese DVD! Can't wait to watch it.

EARTHSHAKE: Very-MAD like pastiche of the beautiful Earthshake! It even has the bit where the main characters look at us and tell us about themselves. Funny...this film already seemed to be a parody of disaster films, if I remember it correctly. Best joke...When the injured are put in a supermarket and the market collapses..."We gotta get the injured out of there." "Why bother?...We already know they're injured." And...the whole article is in "Quakearound". I shook this thing a lot. I liked this one. I'd seen the movie and this one nails it but...Where the heck is Marjoe Gortner?

IF REAL LIFE OPERATED LIKE TV QUIZ SHOWS: This reminds me of the previous article. A courtroom...a parking lot...a wedding...a meal...a date...soup...tests...more meals...This one is more fun than the previous one with folks getting led round in circles while hunting for parking places and a man choking on his wife's jewelry. Oh, and there's actually a 5th page. Wow. This is longer than I thought...a naval vessel...chores...Hmmm, this one does go on a while.

OVERLOOKED DISASTER MOVIES: Pretty funny. Nosebleed! The Jolly Green Giant gets a nosebleed. The Taking of Elevator 123! Marlon Brando dressed as a Native American hijacks an elevator. The American Economy...It collapses! Shower Trap...A gal with long hair gets it caught in the drain and drowns. (I laughed.) Freeway is what you'd think. Famine...This one confused me a bit. I like this article. Why only 2 pages?

SHELLSHOCKED: 9 weird looking people (with names like Steve McSpleen & Ava DaGardner) watch 3 disaster movies in a row. People hang themselves and go crazy and a man jumps into mozzarella. An oddly confusing article that seems overly mean. I didn't love it but I didn't unlove it.

CAT GIFTS FOR CATS WHO HAVE EVERYTHING: Imported French Fleas and insurance policies for each of your cat's nine lives. A fridge with a special opening filled with cat food. It's two pages. It seems out of place after the previous bits but it speeds by and I smiled.

A CRACKED LOOK AT A GARAGE SALE: Very cluttered two-pager. Much like a garage sale. My favorite bit? "This sale is a fraud!" "Why do you say that?" "I made an offer of $1000 for the garage and they turned me down!" So many exclamation points! Lots of signs all over. "Of course women ain't what they used to be...they used to be girls" A woman yells at her friend for selling her vacuum. I think this is a mutli-family garage sale, personally. Too many items for one family.

THE CRACKED GUIDE TO GOLF: I actually learned more about golf from this than anywhere else. There are jokes and yuks and grins, smiles, giggles & laughs. I've never golfed but, if I did, I think I would have learned everything I know from this. And, a guy rips his pants! That's good.

FUTURE INSECT MONSTER MOVIES: The Future! Hop ahead to Those Cracked Monsters from February 1980.

PELL-MELL WITH MEL: Mel Brooks does funny things and now he's spoofing everything! He gives stale bagels to the possessed gal in The Exorcist, he finds the Atlanta Falcon instead of The Maltese Falcon. Basically, everything becomes Jewish. I thought it was hilarious!!! Giving the watermelon to the African-American woman in the Public Enemy gag made me laugh so hard that I had to call Sal's Sahara Laundry.

CRACKED ON CAMPUS: Order some binders and shut your mouth!

CRACKED INTERVIEWS THE SUPERMARKET KING: Mr. Milton Markup rips people off. A Big Sale Inside! turns out to be a big sail on a boat. Nanny hasn't been around in a while. It's good to see her stick it to this guy! Frankly...he's a jerk. Inflation has sent prices sky high & Mr. MM grabs the consumer and squeezes them, if you know what I mean.

CARTOONS: Stanley...Sagebrush...Ye Hang Ups. I will feel a great loss when these no longer wind up the issues. They're like morning comic strips on the next-to-the-last page of the paper.

I have been completely & utterly shut up.


BACK COVER: The Stone Age - Back to Those Cracked Monsters - February 1980

A completely charming, but slightly shopworn, issue. "This issue is a complete DISASTER!" is not strictly true but, at the same time, I think we're in need of a CRACKED Renaissance. Maybe having two people write everything isn't the best idea. I don't know.

Next issue: More disasters.
Posted by Turbot's Finest at 10:13 AM