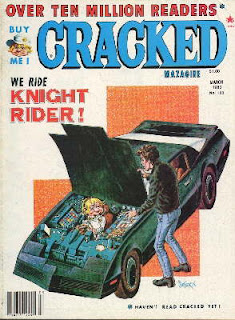 
Great drawing of KITT, David and Sylvester inside the car. And, a very interesting orangey shape behind them. It's all very clean, this cover. But, not in a bad way. It grabs my eye and yanks me inside.

Someone peed on my poster! Actually, this one's pretty good.

TABLE OF CONTENTS: Luke N. Cee is the pppp rder

LETTUCE FROM OUR READERS: Hmmm...Here's the last letter: "Dear CRACKED, Yesterday...I spotted GIANT CRACKED #34 with your movie satire 'EaTing' in it...." Wait a second!!! I thought that, by owning the regular CRACKED magazines from this era, I was getting everything I needed. I thought the GIANTs and the SUPERs and all the others were reprints with the occasional "game" thrown in. I knew that the Fonz For President had a lot of new stuff but...The E.T. satire is only in a GIANT CRACKED? Oh no...Does that mean I need to start collecting those? Oh boy.

The yearly Statement of Ownership and etc. is here. 653,721 monthly in 1982. See the Previous Post about this.

KNUT RIDER: Not a favorite show of mine. I liked it a little more than The A Team. Repetitive stuff that was almost very interesting. I do wish Shadow Chasers would have stayed on for years. I think, at this time period, Kenneth Johnson is the only person to trust with this type of show. But, this bit has some decent gags in it. Nothing really happens. They just drive around and crash into things and do wacky stuff. A classic CRACKED moment: Mike Knut asks Kit to play some music for him while he sleeps (and Kit drives). We see Mike asleep and a trumpet player, a man who has cymbals or a tuba and an older gentleman with an acoustic guitar. What is that? A reunion of the Dixieland Jazz Ramblers, first time meeting up since 1927? What's with the guy and the acoustic guitar? I thought "Well, they couldn't put a rock band there..." But, there's a guy with a trumpet?

All in all, a fun bit for a show I never liked.

NEWSWEAK:Pretty funny text-heavy bit. Set up like a real magazine (as opposed to a mazagine). "The Little Town That Could - And Did" Littleton, Montana put everyone in prison. Horse-napping on the rise! Two movie reviews: Muffin for #10, which is a very funny title, and "I Married a Deadman", which seems to be pure Weekend at Bernie's fun. A lady gives her husband rat poison instead of Tums. He dies but she pretends he's alive. It's hilarious. This is a pretty good bit.

HOW THE FOOTBALL MOGULS EXPECT TO MAKE UP FOR ALL THOSE LOST COMMERCIALS: This was Sports Strike Time! Advertising is everywhere (according to this article) when football returns. No. 7's jersey will now read "DRINK 7 UP". No. 31's will read "Baskin-Robbins 31 Flavors". Band formations at halftime will spell out ads for the blimps. Bubble gum cards will have all sorts of ads built into the stats. At two pages, it's fun.

THE VERY RICH AND THE VERY POOR: One of these...Poor on one side, rich on the other. Some funny moments but it's kind of a shrug. I do like that the rich read MEGABUCK$ and the poor read SPARE CHANGE. In the intro, it says "Thanks to Reaganomics our country's impoverished middle class is disappearing faster that a roll of quarters at a video game arcade." This is Late 1982/ Early 1983! CRACKED tells the future...again.

THE GOOD OLD DAZE OF THE AUTOMOBILE: Really good bit. Nicely done. Lots of very, very early inventions to put on cars. "First Car Heater (1904): Heater worked on simple principle. When driver felt cold, he stopped vehicle to chop up firewood. By the time he finished chopping driver ceased to be cold." It's a car with a wood-burning stove on it. "First Auto Road Signs (1899): Signs reflected the era's horse a buggy mentality." The signs read "WHOA" and "School No Hightailin' it" The early auto ads stressed the positive side of negatives. A couple sits in their car in the moonlight, holding hands. "LeHeap: It often breaks down in the most godforsaken placed. Lucky You!" Great bit...one slight worry...it has that late 50's/ early 60's look to it. It doesn't look like a modern CRACKED article. I wonder if this is a re-print.

$TRIKES ILLUSTRATED: This is no reprint. More sports strike stuff. Wow, this is about as topical as we get. Awesome cover to this (once again) fake magazine. It's an empty stadium with all the teams striking outside. Great art. Ron Zalme! The rest of the article isn't quite as good. They're on strike and they're just hanging around. They love money and they're striking for more. Some funny moments but I can't help thinking that they covered this in the earlier Strike article. Maybe they should have done a Strike COLLECTOR'S EDITION

A CRACKED LOOK AT CABLE TV: This was around when we got Cable TV so I am up for the yuks. This is one of those "multiple panel" ones. One kid wants to watch Channel 8,655. The other wants to watch Channel 2. Channel switching hilarity continues. I want to say that our cable box had three rows of numbers. A button under each row and a switch on the side. If you wanted 20, you moved the switch to the corresponding row and hit the button under the number. The kids in this one have a crazy cable box, apparently. The guy who asks for Cable TV dinners is fun.

I did notice: A two-panel bit with a couple in a car. He says that he thought he'd take them to the drive-in. In Panel two, she says "Why go there? The same movies are playing on cable TV tonight." But...the panels seem to be switched yet the word balloons have stayed where they should. In the first panel, they're passing the drive-in and it looks like the woman is speaking. But, the man is. In the second panel, they're in the suburbs and the man is talking but the woman is actually speaking. They switched the panels but left the words the same. I look too closely at these things.

ONE DAY AT TATTOO SCHOOL: Another decent gag. I giggled.

RONALD REAGAN'S PHOTO ALBUM: Sock it to Ronnie! Jelly beans and Nancy shopping and Bedtime for Bonzo and astrologers and all sorts of gags...Remember Rappin' Ronnie? This bit is OK. I prefer E.T. and J.R.'s photo album/ diaries.

ABSOLUTELY, UNQUESTIONABLY, POSITIVELY, UNDENIABLY, THE VERY, VERY, LAST OF THE CRACKED LENS (and we really, really mean it this time, for sure!) Part XVIII: The Masque of the Red Death is represented. My favorite bit: A cop is getting violently kicked by a man. The cop says "Oh no! Don't do that! You're getting my pants all dirty!"

CRACKED INTERVIEWS THE ELF KING: Christmas! "DO you mind if I ask your name?" "It's Sheldon." "Sheldon the Elf?" "Are you Nanny The Woman? I'm just Sheldon." Sheldon takes Nanny through Santa's workshop. He runs the place because Santa is too busy appearing in ads and on chocolates. Everything is automated and Nanny is a little disappointed. But...when they enter the "Wrapping Dept.", they find the elves sitting around a table working. "I found Christmas. I love it!" For two panels, CRACKED gets sentimental about Christmas. It is surprising and it is lovely. One of my favorite Nanny bits. Read it!

Total: I love to Shut-Up.

Decent issue. Some good laughs. Some filler. But, all in all, this is full of charm. Maybe the Holiday did that to them. I enjoyed this one. I think you will too.

Next issue: Wow...It finally ends. I miss it now like I did then.
Posted by Turbot's Finest at 9:29 AM