CRACKED #181: Check out those robbers! Why aren't they colored in? 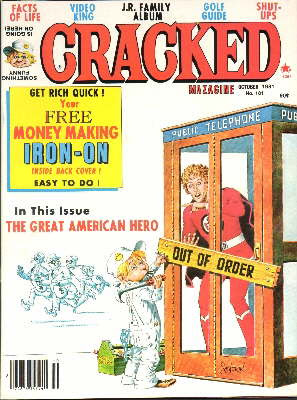 It's not a bad cover but the whole cheapness of these things is getting to me. Where's the background? Why are the three robbers blue? They are not actually filled in. They're just outlines. It's as if no one filled them in. Was it really that expensive to actual fill in the cover? Isn't the cover the selling point of your issue? Why not put some life into it? "Hey Severin, draw Sylvester locking the Greatest American hero into a phone booth so he can't go after some robbers." "OK." "But, don't do anything with the robbers, just outline them." "Huh?" "Yeah. We may or may not color them. t saves ten bucks." "Why not fill the background in with beautiful colors and...?" "Don't say it." "...well, like MAD." "No!!!!"

POSTER: Inside front cover only. It's pink. A chart that shows "Prices", "Quality", "Jobs" and "Pollution". It works. It's comedy. It's alive.

TABLE OF CONTENTS: "Amy Stake" is back as the prufe reeder. I see Gary Coleman!

LETTUCE FROM OUR READERS: Next issue - August 11th. In general, folks really enjoy the magazine. Thank Goodness. I'm still a bit iffy on it since we entered the 80's. Maybe it has something to do with a Sproul Overload. "Too Many Sprouls Spoil The Broth."

AMERICA'S GREATEST HERO: This is actually about as fun as the show, which I never quite understood. It seems like, premise-wise, this should be the most fun show ever. Why did it stink so bad? And, why is this parody not up to much? I shrug at it and watch the jokes fly at me. Oh CRACKED, can we break the formula!

THE CRACKED BOOK OF HANDY HINTS: Various things you can do to save cash and make a stash! "If you're out of perfume, but still want to drive your date wild, dab a little cocoa behind your ear." "Want a quick way to remove old, icky, unsightly bumper stickers from your car?" Hit it with a sledgehammer! (There is a fat lady here!) If Junior puts a mark on the wall, hang a painting over it. Even if it's real low! The bit has some smiles and some cool drawings. We picked it up!

STILL MORE BELIEVE IT OR NOT: This bit has become like The CRACKED LENS except with a lot more reading. Sid Melton is in one of the pictures. He played Alf Monroe on GREEN ACRES. It's odd...I think that the CRACKED LENS articles are becoming less funny as this article begins to take over.

Am I becoming cynical over CRACKED? Ghumdrop, talk to me! I miss you.

WHAT WE'LL MISS WHEN THE 80's BECOME THE 'GOOD OLD DAYS': People use laserwave dishwashers and read comic books on microfilm and have fifteen digit zip codes and there are a lot of clones and robots do housework. And, aren't these bits from 1958?

THINGS WE CAN DO WITHOUT: Well...
"Being Unable to Examine Something Before Buying It"
"Someone tall sitting in front of you at a movie theatre"
"Parents Making Excuses"
"Always being the one singled out in class"
"Always getting unfair treatment"
"Always being chosen last"

They're right. Let's do without them!

THE JR FAMILY PHOTO ALBUM: I love Dallas. I read this bit, which is mostly about JR being very rich. Makes we want to watch this show. At this moment, Season 11 is out on DVD. Where the hell is Season 12? What about that Season 11 cliffhanger? I won't ruin it but...JR is a jerk...again.

CRACKED WORD PLAY: The first time this has appeared. Two pages of fun word games. The first one? "VISION/VISION" = Double Vision. "ENDSENDS" = Making ends meet. I enjoy these bits although I think the solutions are always a little too close to the puzzles. I always tend to pick ahead.

THE FACTORS OF LIFE: Lots of Gary Coleman appearances. This is like the first appearance of Laverne & Shirley back in #135. The Fonz keeps appearing to boost the parody. Here, Gary Coleman keeps appearing. The Art is awesome in this one but the jokes are kind of "Ahhh". Not so great but it's a more fun read than The Greatest American Hero bit at the beginning. At 7 pages, however, this might go on too long.

ABSOLUTELY, UNQUESTIONABLY, POSITIVELY, UNDENIABLY, THE VERY, VERY, LAST OF THE CRACKED LENS (and we really, really mean it this time, for sure!) Part VI: Three pages. Some laughs. I am worried that this bit might be running out of steam. I think they replaced the original writer.

THE CRACKED GUIDE TO GOLF: Captions that get punned out by the drawings. "First, you'll need some clubs". We see a guy and his singing and rug collector's club. No... "Ah, let's put it another way. You'll need a set of irons." There is a man with a handful of steam irons. Can you guess what "a bag to hold your clubs?" involves. (See below) In fact, the constant punning on terminology wears me out by the end of Page Three.

CRACKED INTERVIEWS THE VIDEO KING: A guy who records everything. He doesn't care what it is; he tapes it. And, he has a big wife that dresses exactly like Nanny. it's a little odd. Nanny sort of strolls through this one and asks questions and the guy tapes a lot of things and we move on...

INSIDE BACK COVER: Your "Money Making" Iron-On!
"IITYWYGMAQ"
Do you know what that means? And, if you do, can you tell me why it's funny? There's possibly too much explanation needed to make this fun.

BACK COVER: Great Moments in Entertainment - Bingo invented and made popular by the emperor Ceasarus Saladus. It involves hanging slaves from a giant bingo board. I imagine that will get crowded as we go.

Ahhh...the magazine is going kind of bland on me. God, I wish we'd pick it up!

Next issue: Look who has returned.

*GOLF: There's a picture of an ugly, fat lady holding the clubs
Posted by Turbot's Finest at 12:31 PM