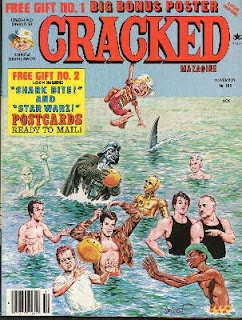 
Yes, the Fonz is there. All your other favorites are, too. It's odd that The Godfather is still there as Part 2 came out four years previous. Sylvester is pointing at a shark as he hangs from a 'C'. And, the oddest part, Steve Martin is popping out of the water near the back. Huh? He's not in this issue. As far as I know, he isn't in any issue in the near future. What's he doing here? Apart from folks loving The Jerk very much. He was probably thrown in at the last minute. It's a little odd.

POSTER: Warning: This room protected by R.A.I.D.* Security Systems. Yellow is back!

TABLE OF CONTENTS: I see a vampire Bob Hope!

LETTUCE FROM OUR READERS: Next issue - September 26th. Only one page...again.

THE GREATEST SEQUEL EVER MADE: Everybody from the movies is in this. It's about a baseball game and Rocky is in it and the Godfather and Jaws and the Talking Blob and aliens and everyone. It's pretty much the Ultimate Big Pile article. Everybody's in it and everybody's doing their thing and it's fun. The cover matches the lead article. A lot of talk about sequels and how they manipulate folks and things like that. It's a great opener.

THE CRACKED INVESTIGATION OF THE UFO PHENOMENON: A series of gags about people seeing "UFO" 's, strange accidents and other odd things. All of them are fake. It's just dumb people. My favorite is the scientist pointing at the strange shaped skull unlike anything human. (It's a jack-o-lantern.) There is an "illegal alien" joke. It's pretty sophisticated, for CRACKED. Another good article.

THE CRACKED WORLD OF SUMMER: Well, they can't all be smart. A series of comic strip gags. The best one is a kid flying through a window on a wave when the pool breaks. Oddly enough, there is a two-page spread in here (set at a BBQ) but it's not the middle of the issue. Hmmm...

YOU KNOW YOU'RE IN A TACKY BANK WHEN:
...the bank guard's gun leaks water!
...the bank's armored car doubles as a fresh fruit stand!
...the bank can't break a twenty!

CRACKED PUTS THE BITE ON DRACULA: There's Bob Hope! And, he is a vampire. There is a sitcom called ALL IN THE BELFRY. There are fake albums for Deathrow Tull and Linda Ronstdead. Thirsty vampires chase down fat ladies. (Do they have more blood?) There's a vampire craze! Enjoy! This is a pretty good one. Again, as obvious as a green pea, but there are some smiles here.

A CRACKED LOOK AT A BACKYARD BARBECUE: Huh? Didn't they just do this a few pages back? What is this about? More of the same. Maybe there are some repeat jokes in here, I don't know.

Bill Sproul H.S. Class of '42 is written on the shirt of one man. Actually, he's in the earlier one but...

WHEN VERMIN FIGHT BACK: Bugs and things getting smart and surviving against man. But, I'm pretty sure they do that anyway. I don't know. This one is kind of blah. An occasional moment of "Not Bad" but generally blah. Move on...

The Cracked Bookstore: No delivery!

WHEN UFO'S EVER DO LAND: They land and humans show them stuff like war and prostitutes and zoos and things like that. This one should have a big stamp across it marked "SATIRE". It is more obvious than some other very obvious articles in this issue. At three pages, it is OK.

A MODERN PARENT VS. A TRADITIONAL PARENT: Modern on left. Traditional on right. Food, pets, dress, religion, money, medicine...it goes on and on. Modern parents are wishy-washy and allow their kids too much leeway. Traditional parents were stronger but oh-so-dull. This goes on for four pages. Why? I don't know.

A DOG'S DAY AFTERNOON: Funny one pager. Again, smarter than the rest of the issue.

FUNNIEST ISLAND: Winding down. A parody then Nanny. Today, I'm a little bored with this format. Some folks show up and want their fantasies lived out. It doesn't go completely right. But, it does go on for six pages. A little guy wants to box. A feminist wants to be Robin Hood. It goes on and then it ends and Nanny is on the next page.

CRACKED INTERVIEWS THE GARBAGE KING: He makes million off of garbage and he's a jerk! A strange moment in this one that made me less interested: The King turns over a garbage can and says you can learn a lot from garbage. He's sifting through and talking about the guy. Then, he says the garbage creator is a big guy who doesn't like people looking through his garbage. "How do you know?" "He's behind you." In the next panel, Nanny has been beaten up by the guy. The King is fine. Gosh, what a prick. I'm not so thrilled with this one.

Total - Yes, this is nice! The Great American novel will be 2/3rds Shut-Ups.

BACK COVER: Some junk about a guy chasing a lion.

The issue starts off great but gradually levels out with obvious articles and mean-spirited nonsense. I don't like it when the issues go south like this. Oh well. What's next?