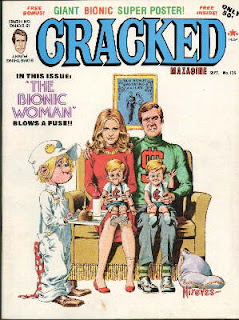 They're a family! And, they're bionic! And, they're on the cover! Where's the Fonze? Oh, there he is. The Fonz's long, little head is in the top left-hand corner. "Hi, Fonze!" Welcome to the first Issue of Cracked A.F. (After Fonze! Nerd!)

Let's enjoy this issue by opening it up and looking inside.

Let me just step aside before I begin this review and say this: I've just flipped through this one right before the review and I was not goofing. The Renaissance of Cracked has begun! Almost everything in this issue is funny or charming or will make you go "Yes...Nice...Hmmm...Swell." Just a warning. I like this one.

Poster: The Bus to Wackytown has already left the station! Sylvester did something or other here to the Bionic bits of these bionic people and the Bionic Man and the Bionic Woman will never be the same! Hang proudly alongside The Fonze.

Tables of Contents: This one is like garlic and butter being cooked on the bottom of the pot when you're making cheese potato soup. You could float away on the anticipation.

Lettuce to the Readers - No Nerds here! There is a note from the publishers saying, "The publishers of CRACKED are appealing to their readers to search in their attics and cellars for the earliest issues of CRACKED. Number 1 through 26, specifically. (They were published in 1958 to early 1962.)" Hey, folks give 'em a yell if you got any lying around. Maybe they'll treat you to lunch with The Fonze!

The Bionic Lady - Some nice laughs in here. I realized why I prefer the TV parodies to the movie parodies. There is more stuff to parody. A movie has a bunch of characters, a few big scenes and goes for two hours, on average. A TV show grinds on and on and on and builds and changes. So, when they review these there is more to milk and squeeze. And...they don't have a specific plot to parody. When they parody Jaws, they follow the plot of Jaws. When they parody The Bionic Woman, they can make up their own story as long as it fits the milieu. More freedom. That's why I prefer them. Good stuff here.

A CRACKED look at CB Radios - Do I need to elaborate here or do the words "obviously superb" hold any weight? They will do CB articles in later issues but this one is the best. It starts with a CB dictionary loaded with great drawings of happy bears. Then, it moves into how to use a CB, who uses a CB and so many great things. Good God, it's time to go up into my attic and fish the old CB out. I wonder if I can rustle up some of my old honkies?

A CRACKED Salute to the Olympics - On it! This one starts out pretty average, which means it's really worth reading. And then, it details a bunch of new events for our modern Olympics and the whole article audibly goes Shoop! right outta the park. "The Garbage Dump Jump" is pretty obvious. "The 1000 Meter Kayak Run" is a race through a polluted river. "The 600 Meter Guardian Relay" involves carrying a parent or guardian up to a 16-year-old before they try to enter an R-rated movie on their own. Ahhh...I need a break.

They gave me one!

One Evening in a Fancy Restaurant - Just a simple one-page gag. Nice. Gets in, get out. Let's move on. Thanks for the smile.

How America Won Her Independence - 1976, folks. Let's take the Cracked Time Machine back to 1776. Shall we? This one has an old-style font that I love. For this one, they did something extra special. They actually used a joke book from 1776 for all the gaggery. Some of these jokes you'll know better than you know your feet. Others will be new because they're so old. It's all capped with a patented Cracked Satire Zing! Great stuff.

A Cracked Look at an Airport Terminal - I don't know. Maybe it's the issue it's in. I feel a great warmth towards this "Look At..." I'm softening. The Fonze might call me a "Nerd!" but there are enough funny drawings and decent gags for me to enjoy this one.

The Big Budget Epic vs. The Low Budget Quickie - Zing! They really stick it to people who don't have a lot of money but still want to make a movie! Good for them! Do it, Cracked! I support you. On the left side we see what the Hollywood Epic has at its disposal. The right side is the low budget equivalent. (No stars, bad special effects, etc.) Hey, these people with less money should just pack it and go back to Detroit! Way to go, Cracked! If there's one thing we need to cut down on, it's that underdog spirit. If you don't have the money to make a film as big and slick as someone who has lots of money, make donuts for a living! Cracked does it again. And, this time, I won't even wash my hands afterwards.

Ahhh... I need a breather again. So good... The Cracked Bookstore is here. I still don't have my order but the bitterness is dissipating, especially when I glance ahead.

The Rock Craze Rolls On - Holy S**T! This issue has everything! Pet Rocks! Rock Cars! Rock Children! TV Rock! Rock Cigarette Lighters! Rock Politicians! I'm going to OD on exclamation points! So great. Three pages of sheer joy. Like eating a marshmallow sundae off of the stomach of a beautiful woman while watching reruns of The Honeymooners.

Fonzerella - Two Words: Cinderella Fonzie! No really, it's great. His presence is all around us now.

The CRACKED Guide to Skateboarding - One of the slightly weak spots of the magazine. It's just OK. It hits the craze nicely but it comes after Fonzerella. Nothing could survive. Maybe Fonzerella should have been last.

CRACKED Interviews the Political King - This ain't my Nanny! She's cute but she's tiny! Who is she? Where's Nanny? Hmmm...Maybe this issue peaked with Fonzerella? No. This is still funny. She talks with a very corrupt Senator who is, frankly, a jerk. It's OK. Not one of her best but solid.

Back Cover: "Great Moments In Inventions" The First Typewriter. I smiled, which is perfect because my belly has been shakin' and achin' ever since the poster. Nice to rest.

What an issue! Like Def Leppard's Hysteria, it peaks about two songs (articles) before the end but it doesn't harm the issue. The Fonz rubs off on this and it is so good. Let's hope this will continue. (I've seen the cover of the next issue. I'm pretty sure it can.)